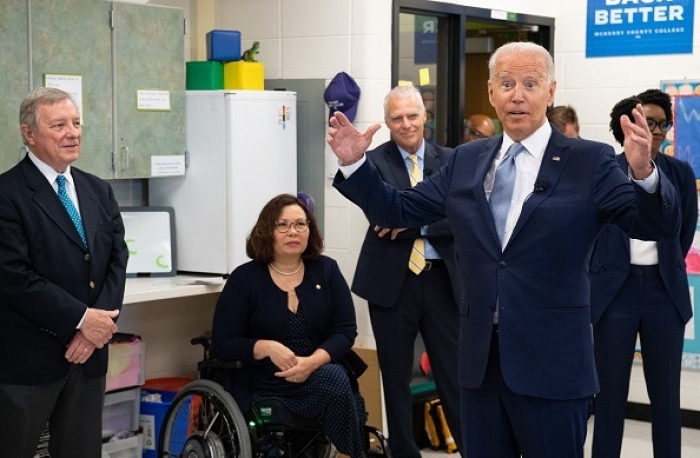 (CNSNews.com) - Sen. Dick Durbin, now the ranking Democrat on the Judiciary Committee, has handled classified material many times during his 40 years in Washington. He said he's "concerned" about Joe Biden's apparent mishandling of it.

But Durbin also said he's concerned about the "endless investigations" promised by "MAGA Republicans" who now control the House of Representatives.

"Well, I'm concerned," Durbin told CNN's "State of the Union" on Sunday. He was talking about the additional classified documents found at Biden's Wilmington home on Friday, during a 13-hour search by the FBI. This was the fifth such discovery.

"There's a standard that we follow when it comes to members of Congress and classified information," Durbin said:

"The door to my office is closed. The person who presents the document to me takes it out of a locked briefcase, hands it to me and watches as I read it, when I finish reading it, and he takes it back and puts it in the briefcase and leaves the scene.

"I mean, that's how carefully we review these documents. To think that any of them ended up in boxes in storage one place or the other is just unacceptable.

"But, having said that, let me make this point clear. Joe Biden has said from the start: We are going to be totally transparent about this. Let the chips fall where they may. I'm going to open my home voluntarily to a search, not the first search, I'm sure, of his offices and home. He has shown total cooperation in this effort. That is a sharp contrast to President Trump."

Host Dana Bash replayed a video of something Durbin said last year when classified documents were found at former President Trump's Mar-a-Lago estate in Palm Beach. "It's an outrage," Durbin said at the time. In fact, he used the word "outrage" three time in one breath.

"Is it also an outrage for the current president to have what appears to be multiple classified documents in multiple locations?" Bash asked Durbin.

"At its heart, the issue is the same," Durbin said.

"Those documents should not have been in the personal possession of either Joe Biden or Donald Trump.

"But what happened and followed from it is significantly different. Donald Trump defied those who knew the documents were in place and ultimately led to, involuntarily, a court order and a search of his Mar-a-Lago hotel resort to find out how many documents were there.

"Contrast that with Joe Biden. Embarrassed by the situation, as he should have been, he invited the government agencies in to carefully look through all the boxes he had accumulated. It's a much different approach.

"It is outrageous that either occurred. But the reaction by the former president and the current president could not be in sharper contrast."

Asked if Biden has "lost the high ground" on the handling of classified information, Durbin agreed:

"Well, of course. Let's be honest about it. When that information is found, it diminishes the stature of any person who is in possession of it, because it's not supposed to happen.

"Whether it was the fault of a staffer or attorney, it makes no difference. The elected official bears ultimate responsibility."

Then Durbin slammed Republicans who intend to investigate Biden's alleged mishandling of classified documents as well as alleged influence-peddling by the Biden family. (It remains to be seen if the two are related.)

"And we have to worry, since this new group that has taken over control of the House of Representatives has promised us endless investigations, confrontations, impeachments and chaos, what is going to happen," Durbin said.

"I only have one word for those who are dubious as to whether that will happen, and the word is Benghazi. How long did we spend going through Benghazi hearings in the Republican-controlled House in the past?

"Now imagine the MAGA Republicans and what they're setting out to do. I'm sure that they are going to have investigations to our heart's delight."