As Dems Prepare to Commemorate January 6, Do Americans Share Their Enthusiasm? 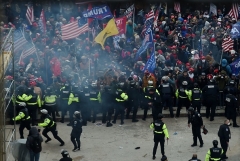 Police hold back Trump supporters as they gather outside the US Capitol on January 6, 2021. (Photo by OLIVIER DOULIERY/AFP via Getty Images)

(CNSNews.com) - On January 6, 2021, an angry, unruly mob of Trump supporters broke into the U.S. Capitol, putting sitting lawmakers in fear for their lives as those members of Congress gathered to certify the 2020 election that put Joe Biden in the White House.

The only person shot and killed on that day was a protester, Ashli Babbit, killed by a Capitol Police officer as she crawled through a broken window. The U.S. Justice Department declined to prosecute the officer who killed her.

Dozens of law enforcement officers suffered varying degrees of injury at the hands of the rampaging mob on that day, but the protesters who vandalized the Capitol did not directly kill anyone.

And thanks to the heroic efforts of law enforcement, they never encountered the frightened members of Congress.

Press reports say the FBI has arrested more than 700 of the law-breakers to date, and if possible, all are being/will be prosecuted.

Democrats and two Republicans now sit on a "Select Committee to Investigate the January 6 Attack on the United States Capitol."

That committee is now holding hearings -- subpoenaing Trump aides, Trump allies, and Trump-related documents. They investigate, not because they don't know what happened on January 6, but for political reasons: They are seeking to lay the blame for the day's mayhem on former President Donald Trump in particular and Republicans in general.

In fact, to replay the outrage felt by many Americans on that terrible day, Democrats are planning a one-year anniversary commemoration to mark the disgraceful event.

According to House Speaker Nancy Pelosi (D-Calif.): "Already, preparations are underway for a full program of events, including a discussion among historians about the narrative of that day; an opportunity for Members to share their experiences and reflections from that day; and a prayerful vigil in the evening."

Rep. Abigail Spanberger, a Virginia Democrat, is not a member of the select committee that aims to keep the events of January 6 in the headlines, but she told CNN on Tuesday that she appreciates the select committee's work, even if it isn't front-and-center among her constituents' concerns:

I think what we'll see come out of the committee, and as your reporter mentioned, there have been hundreds of interviews, thousands of documents that have been subpoenaed, and so laying that out for the public is going to be incredibly important for us, for the American public, to be able to understand what happened that day.

And certainly I was in the House chamber when the attack began. I was there for the entirety of the insurrection until police were able to take control of the building, and I can tell you, it was an awful day.

And so to have that information laid out publicly, to have public hearings, will put forth video and documentation that hasn't previously been seen by the public and make a very clear argument and understanding of what happened on that day and leading up to it.

So I am appreciative of the committee's work, and I look forward to the public hearings that they'll be having in the spring for that purpose, so that we as an American public can understand without equivocation what happened on that day.

But what about Spanberger's constituents? Do the American people still wonder and worry about "January 6 and the insurrection?" CNN's Jake Tapper asked Spanberger:

"It depends on the environment, the place, the topic that's coming up and where I'm visiting," Spanberger replied:

Certainly I think in the early days, in the aftermath, when it was all over the news, it was a topic that was raised very frequently.

Certainly with the ebbs and flows of the pandemic, the delta variant, the omicron variant, the challenges people are facing with kids returning to school in the fall and challenges across the board that Americans continue to face -- most of my conversations do impact and focus on the issues that impact, you know, the economy, the pocketbook, the kitchen table issues for my constituents.

I do hear about it across my district in that context.

The House will not be in session the week of January 6 when the Democrats' "full program of events" takes place, but as Pelosi said: "All events will be live-streamed, so that Members can watch and participate from their districts..."