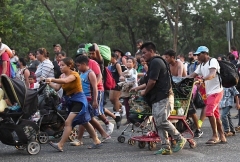 Migrants heading in a caravan to the US walk along the route between Escuintla and Acacoyahua, Chiapas State, Mexico, on October 29, 2021. (Photo by ISAAC GUZMAN/AFP via Getty Images)

(CNSNews.com) - In a memorandum issued on Friday, Homeland Security Secretary Alejandro Mayorkas once again announced his intention to end the Migrant Protection Protocols, or the "remain in Mexico" program for migrants.

Implemented under President Donald Trump, MPP effectively required would-be immigrants to remain in Mexico until their asylum claims could be adjudicated. The program was credited with reducing the flow of illegal immigration. Even Mayorkas agreed that it worked:

After carefully considering the arguments, evidence, and perspectives presented by those who support re-implementation of MPP, those who support terminating the program, and those who have argued for continuing MPP in a modified form, I have determined that MPP should be terminated," Mayorkas's memo said.

In reaching this conclusion, I recognize that MPP likely contributed to reduced migratory flows. But it did so by imposing substantial and unjustifiable human costs on the individuals who were exposed to harm while waiting in Mexico.

The Biden-Harris Administration, by contrast, is pursuing a series of policies that disincentivize irregular migration while incentivizing safe, orderly, and humane pathways.  These policies -- including the ongoing efforts to reform our asylum system and address the root causes of migration in the region -- seek to tackle longstanding problems that have plagued our immigration system for decades and achieve systemic change.

Once fully implemented, I believe these policies will address migratory flows as effectively, in fact more effectively, while holding true to our nation’s values.

The Mayorkas memo was accompanied by an "Explanation of the Decision to Terminate the Migrant Protection Protocols," which reads in part:

On February 2, 2021, President Biden issued an Executive Order directing the Secretary of Homeland Security to “promptly review and determine whether to terminate or modify the program known as the Migrant Protection Protocols.”

After extensive review, the Secretary of Homeland Security concluded that the Migrant Protection Protocols (MPP) should be terminated, and on June 1, 2021, issued a memorandum to that effect.

On August 13, 2021, however, the U.S. District Court for the Northern District of Texas determined that the June 1, 2021, memorandum was not issued in compliance with the Administrative Procedure Act (APA) and caused DHS to violate 8 U.S.C. § 1225, vacated the memorandum, and remanded it to the Department for further consideration.

The court additionally ordered DHS to “enforce and implement MPP in good faith” until certain conditions are satisfied, including that MPP be lawfully rescinded in compliance with the APA (Administrative Procedures Act)” -- a ruling that the government is vigorously appealing.

Mayorkas conceded that "the United States is a nation with borders and laws that must be enforced. It is also a nation of immigrants. This Administration is, as a result, committed to the twin goals of securing our borders and offering protection to those fleeing persecution and torture.

"MPP is neither the best, nor the preferred, strategy for achieving either of these goals...."