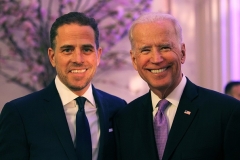 Joe and Hunter Biden at an event in Washington, D.C., in April 2016. (Photo by Teresa Kroeger/Getty Images for World Food Program USA)

(CNSNews.com) - Rep. Adam Schiff (D-Calif.) and other Joe Biden supporters in the liberal media are dismissing reports that Hunter Biden cashed in on his father's position, accepting huge payments from both Ukraine and China to arrange introductions with then-Vice President Biden.

Schiff told CNN on Friday, "We know that this whole smear on Joe Biden comes from the Kremlin. That's been clear for well over a year now, they've been pushing a false narrative about the vice president and his son."

So Maria, it's funny that some of the people that complained the most about intelligence being politicized are the ones politicizing intelligence. And unfortunately, in this case, it's Adam Schiff, the chairman of the House intelligence committee, who, as you pointed out Friday, said the intelligence community believes that Hunter Biden's laptop and the e-mails on it are part of some Russian disinformation campaign.

Let me be clear -- (the) intelligence community doesn't believe that, because there's no intelligence that supports that. And we have shared no intelligence with Chairman Schiff or any other member of Congress that Hunter Biden's laptop is part of some Russian disinformation campaign. It's simply not true.

Don't drag intelligence community into this. Hunter Biden's laptop is not part of some Russian disinformation campaign, and I think it's clear that the American people know that.

Emails from a laptop apparently belonging to Hunter Biden and abandoned at a computer repair shop in Delaware indicate that Hunter received huge payments from Burisma in Ukraine and from companies connected to China's Communist Party.

It appears he was paid to make introductions to his father, the vice president, although Joe Biden has denied knowing anything about his son's business dealings.

Ratcliffe told Bartiromo he knows very little about Hunter's emails, some of which were published in The New York Post last week:

So, Maria, the fact that I know so little about those e-mails and what is apparently on Hunter Biden's laptop underscores the point that I just made. This is not part of some Russian disinformation campaign.

The intelligence community has not been involved with Hunter Biden's laptop. Hunter Biden is a U.S. person, and he would be subject to any investigation regarding fraud or corruption would be rightfully the jurisdiction of the FBI.

So the FBI has had possession of this. What I can say, without commenting on any investigation that they may have into corruption or fraud, is to say that their investigation does not center around Russian disinformation, and the intelligence community is playing no role with respect to that.

Ratcliffe said his role as Director of National Intelligence is to "tell the truth" and not allow politicians to do what Schiff has done:

"And in this case, Adam Schiff saying that this is part of some Russian disinformation campaign and that the I.C. has assessed that or believes that is simply not true. So I appreciate the opportunity to be able to tell the American people, that that's the case. And I will continue to do that whether Republicans or Democrats, if they try and leverage the intelligence community for political gain I won't allow it."

The FBI has had Biden's laptop and hard drive since December 2019, and Republicans want answers.

Sen. Ron Johnson, chair of the Senate Homeland Security Committee, said he's now trying to get the FBI to tell us, "Is this story true? Can you verify any of this?"

"So I just sent another letter yesterday, because the FBI has a duty to inform us," Johnson told Bartiromo on Sunday. "If they believe this is maybe Russian disinformation, they should give us a defensive briefing. They should tell us about that.

"If, for example, they also believe that what information this whistle-blower gave us is fraudulent, that would also be a crime, and the FBI should tell us that. So we're trying to suss out of the FBI, what do they know and when did they know it?" Johnson asked.

"But the larger question really is, if they had this information, and these are genuine e-mails, and it would probably reveal all kinds of things that would have been very relevant to the (Trump) impeachment case, why did they sit on it? Are they covering up just because Hunter Biden might be engaged in things that also maybe should have been investigated and possibly prosecuted?"

Joe Biden has not addressed the Hunter Biden story except to complain that a CBS reporter would ask him about it. Joe is off the campaign trail until Thursday, when he's scheduled to meet President Trump for another debate.