DoD: No Deal Yet on NATO Fighter Jet Transfers to Help Ukraine 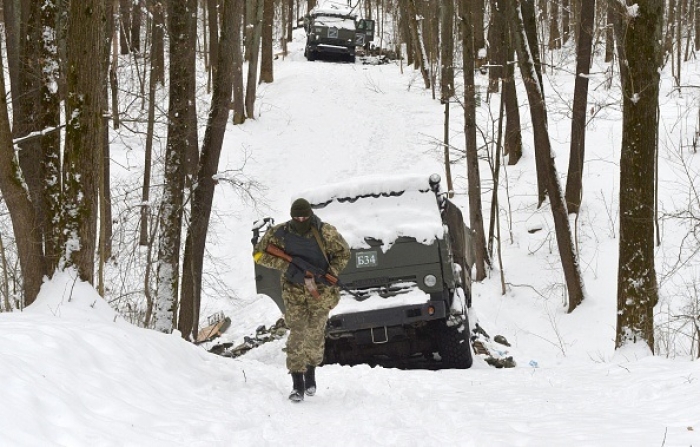 A member of the Ukrainian Territorial Defense Forces walks past destroyed Russian military vehicles in a forest outside Ukraine's second-biggest city of Kharkiv on March 7, 2022. (Photo by SERGEY BOBOK/AFP via Getty Images)

(CNSNews.com) - Ukrainian President Volodymyr Zelenskyy is asking for either a no-fly zone or for more fighter jets to defend his beleaguered country, but on Monday, a Defense Department spokesman said discussions on aircraft transfers are just beginning.

Admiral John Kirby was responding to questions about a third nation, such as Poland, sending its Soviet-era MiG fighter jets to Ukraine, if the United States would "backfill," or make up for the transfer of Polish jets with U.S. planes.

"I think we're still working our way through all that," Kirby told a news conference:

"It's too soon to know, with great specificity, what a potential backfill would look like. But we're just not there in the discussions, even within our own interagency, much less with a nation like Poland.

"So, you know, it would depend on how many they would need. It would depend on how long they would need them. And then you'd have to look at where an inventory -- could you possibly provide that...I mean, if we're talking about a permanent sale, that can take some time. We're just not there yet. I mean, I appreciate the question, but we're just not prepared to answer it right now."

On Sunday, Secretary of State Antony Blinken told CBS's "Face the Nation" that if NATO members want to send fighter jets to Ukraine, "that gets a green light" from the United States:

"In fact, we’re talking with our Polish friends right now about what we might be able to do to backfill their needs if, in fact, they choose to provide these fighter jets to the Ukrainians.  What can we do?  How can we help to make sure that they get something to backfill the planes that they’re handing over to the Ukrainians?  We’re in very active discussions with them about that," Blinken said.

But on Monday, press reports quoted Polish officials as saying that no Polish MiGs have been sent to Ukraine.

Piotr Muller, a Polish government spokesman, was quoted as saying that NATO countries are discussing the issue of sending fighter jets to Ukraine, but they have reservations about doing so: ""It is a very delicate matter," Muller said. "The Polish authorities have not made any decisions on the transfer of the planes to Ukraine. It is not true that the airplanes are taking off from Poland for combat missions over the territory of Ukraine."

Back at the State Department on Monday, a reporter asked if NATO jet transfers and U.S. back-filling is really something that's under consideration.

"What we've said is that this will be a sovereign decision for a nation state to make," Kirby responded. "Whether it's Poland or anybody else, that should they want to provide aircraft to the Ukrainian Air Force, that's a sovereign decision that they can make. The United States is not going to stand in the way of that.

"There is -- there was discussion about if a nation such as Poland were to do this, would there be a capacity for the United States to backfill those aircraft with American made aircraft? And what I can tell you is because I can only speak for the Department of Defense is that we are part of an interagency discussion to examine that possibility," Kirby said.

"No decisions have been made. Certainly, none that we're aware of by Poland even, as you pointed out in your quotes there. But we are having a discussion about should a nation like Poland want to do this? And should there be a desire or a need for some sort of backfill of assets. You know, what would that look like? How would we do that? How many? From where? Those are the kinds of things we're talking about right now."

At the end of the news conference, Kirby once again addressed a question about NATO nations sending jets to Ukraine and U.S. back-filling:

"I would just say again, we're very early on in a discussion here about a possibility," Kirby repeated:

"It's not even a done deal at this point. But it's just a discussion about the possibility of should there be a nation that would want to give aircraft to the Ukrainians and would ask for a backfill from the United States.

"Should that happen, what would that look like? How would we do that? And we don't have all the answers right now. I understand the great interest in it. But the truth is we're very early on in in a discussion right now about what the possibilities of that could be. We just don't have enough granularity to be able to make tough -- easy decisions right now about how many aircraft?

"Where they would come from? How they would get to where they're going? We're just not there yet. Look, I think it's -- we should all just kind of step back just a little bit here. And rather than get dragged down into the idea of backfill of aircraft, just take a look writ large about what's going on here.

"Ukraine is in a significant fight for its country and its citizens. The United States, and many other nations are doing a lot to try to help them in that fight. And President Zelensky has shown great courage and poise and leadership by staying in Kyiv and truly leading his country through this. And what I can tell you is that from the United States perspective, certainly from the Department of Defense, but I'd say across the administration.

"We're going to continue to look for ways to help Ukraine defend itself. We're not always going to have all the answers in the moment that they become news. But it doesn't mean that we're not going to take them seriously and consider them and look at them and see what can be done. The other thing that we're doing, and I hope it's clear, in the brief announcement I had today.

"We've invested a lot of time in the last year in revitalizing alliances and partnerships in Europe and around the world. And I think you're really seeing that bear fruit right now. I just think it's important to keep a little bit bigger perspective on this, and not just get dragged down into the particular headline of the day."