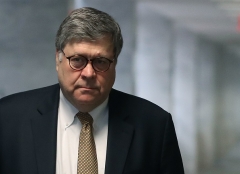 (CNSNews.com) - U.S. Attorney John Durham, as part of his investigation into the origins of the Trump-Russia case, has been looking into the issue of unmasking.

And the attorney general determined that certain aspects of unmasking needed to be reviewed separately as a support to John Durham's investigation. So he tapped John Bash, one of our U.S. Attorneys out of Texas to do just that.

And Sean, obviously we know that unmasking inherently isn't wrong, but certainly the frequency, the motivation and the reasoning behind unmasking can be problematic. And when you're looking at unmasking as part of a broader investigation like John Durham's investigation, looking specifically at who was unmasking whom can add a lot to the understanding about motivation and big picture events.

Hannity said sources have told him that unmasking -- asking to know the names of American citizens caught up in foreign surveillance -- increased "three-fold" in Obama's second term.

"Well, that's why the attorney general determined that it was appropriate to look at unmasking as a support to John Durham's investigation and looking specifically at episodes both before and after the election.

"And like I said, the frequency, who was unmasking whom, these -- all of these circumstances and events can shed light and give us a better understanding of what happened with respect to President Trump, his campaign and of course, what happened after he was elected as well."

Kupec also explained the Justice Department's involvement in the death of George Floyd, a Minneapolis man who died with a police officer's knee on his neck, while pleading that he couldn't breathe. Four Minneapolis police officers at the scene have been fired amid calls for murder charges.

Violent protests have rocked the city.

"Well, certainly our hearts go out to the victim's family here," Kupac said. "And the FBI is investigating. The attorney general and the head of the civil rights division is monitoring the situation closely.

"And so we are waiting for the results of the FBI's investigation, which they will present to our U.S. Attorney there in Minneapolis, and then we'll take it from there. But certainly a very, very troubling and upsetting video to watch."

Sen. Graham: 'Did Obama Administration Use Unmasking as a Political Weapon?'
Clapper Doesn't Remember Why He Made the Unmasking Requests: 'It's a Routine Thing'