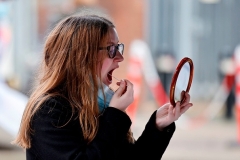 A women tests herself for coronavirus. (Photo by TOLGA AKMEN/AFP via Getty Images)

(CNSNews.com) - The Biden administration's strategy for dealing with COVID this winter includes widespread testing, as announced by President Biden on Thursday -- a message later amplified by Dr. Anthony Fauci on Thursday evening:

"I mean, the president made that announcement in his five-part plan to address what we're going to be facing this winter," Fauci told MSNBC's Chris Hayes. "And one of them that we've spoken about and will happen is to really flood the system with tests, including free tests.

"And, in fact, what people are not aware of is that there's an investment of billions of dollars to make anywhere from 200 million to 500 million tests available per month. So, we really want to flood the system with testing and make it free. And that's exactly what the goal is."

Fauci said readily available and free COVID testing will either alleviate personal health concerns or show that a person has COVID, in which case quarantine will be necessary.

In his remarks at the National Institutes of Health -- where Fauci works when he's not on television -- President Biden said testing is the third pillar of his five-part COVID strategy, heading into the winter:

"This winter we are going to make free at-home tests more available to Americans than ever before," Biden said:

To better detect and control the Delta variant, I made testing more available, affordable, and convenient.  I used the Defense Production Act to increase production of rapid tests, including at-home tests.

When I came into office, none of these tests were on the market.  Thanks to our actions and the work of all of you, we now have at least eight at-home testing options and prices for those tests are coming down.  But it still isn’t good enough, in my view.

That’s why I am announcing that health insurers must cover the cost of at-home testing.  So that if you’re one of the 150 million Americans with private health insurance, next month your plan will cover at-home tests.

Private insurers already cover the expensive PCR test and — that you get at a doctor’s office.  And now they will cover at-home tests as well.

Now, for those not covered by private insurance, we’re going to make available free tests at thousands of convenient locations — locations for folks to pick them up and take a test kit home.

The bottom line: This winter, you’ll be able to test for free in the comfort of your home and have some peace of mind.

This is on top of the 20,000 sites already around the country, like pharmacies, where you can go in and get tested for free.  We have to keep this going.

The other four pillars of Biden's plan include:

-- launching new family vaccination clinics to make it easier for children, parents, and entire families to get vaccinated in one place;

-- increasing the number of surge response teams to overburdened hospitals and communities;