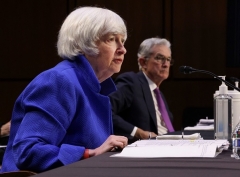 (CNSNews.com) - Although "the economy has continued to strengthen," inflation will persist "well into next year," Federal Reserve Chairman Jerome Powell told the Senate Banking Committee on Tuesday.

In his opening statement, Powell blamed the situation on pandemic-related supply and demand imbalances:

Supply chain problems have made it difficult for producers to meet strong demand, particularly for goods. Increases in energy prices and rents are also pushing inflation upward.

As a result, overall inflation is running well above our 2 percent longer-run goal, with the price index for personal consumption expenditures up 5 percent over the 12 months ending in October.

Most forecasters, including at the Fed, continue to expect that inflation will move down significantly over the next year as supply and demand imbalances abate. It is difficult to predict the persistence and effects of supply constraints, but it now appears that factors pushing inflation upward will linger well into next year.

Powell noted that inflation imposes "significant burdens," especially on people who struggle to pay for food, housing and transportation.

"We are committed to our price-stability goal," Powell said. "We will use our tools both to support the economy and a strong labor market and to prevent higher inflation from becoming entrenched."

Then there's the COVID wild card:

"The recent rise in COVID-19 cases and the emergence of the Omicron variant pose downside risks to employment and economic activity and increased uncertainty for inflation," Powell said. "Greater concerns about the virus could reduce people's willingness to work in person, which would slow progress in the labor market and intensify supply-chain disruptions.

"To conclude, we understand that our actions affect communities, families, and businesses across the country. Everything we do is in service to our public mission. We at the Fed will do everything we can to support a full recovery in employment and achieve our price-stability goal."

Testifying alongside Powell, Treasury Secretary Janet Yellen told the committee, "Our economic recovery is on track." She pointed to monthly job growth, the low unemployment rate, and passage of the bipartisan infrastructure bill.

Yellen also credited the "bold relief measures" passed by Congress -- and the successful implementation of those relief laws by the Treasury Department -- for preventing a slide into recession.

First, the American Rescue Plan’s expanded Child Tax Credit has been sent out every month since July, putting about $77 billion in the pockets of families of more than 61 million children. Families are using these funds for essential needs like food, and in fact, according to the Census Bureau, food insecurity among families with children dropped 24 percent after the July payments, which is a profound economic and moral victory for the country.

Yellen said she sees two major decisions looming in December: the need for Congress to raise the debt limit; and passage of the partisan Build Back Better Act.

"I applaud the House for passing the bill and am hopeful that the Senate will soon follow. Build Back Better is the right economic decision for many reasons. It will, for example, end the childcare crisis in this country, letting parents return to work.

"These investments, we expect, will lead to a GDP increase over the long-term without increasing the national debt or deficit by a dollar. In fact, the offsets in these bills mean they actually reduce annual deficits over time."