Flashback: Sen. Reid Proudly Declares Himself King of Earmarks: 'I Boast About Earmarks' 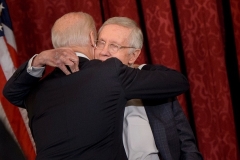 (CNSNews.com) - On a day when "concerned" Senate Democrats met behind closed doors to look for a "path forward," as Sen. Harry Reid described it, Reid told reporters, "I'm one of the kings of earmarks."

The retiring Senate Minority Leader said he's "never apologized to anybody" for his attitude toward  taxpayer money that lawmakers direct to be spent on pet projects back home.

"I go home and I boast about earmarks. And that's what everyone should do," Reid said.

A reporter asked Reid about earmarks following reports that House Republicans were trying to restore them. (House Republicans, in an attempt to curb wasteful spending, agreed to ban earmarks in 2011, and Speaker Paul Ryan has vowed that as long as he's speaker, "there will be no earmarks."

Press reports say Ryan (R-Wis.) on Tuesday stopped a Republican attempt to reverse the earmark ban, reminding his caucus that restoring them after Trump's "drain the swamp" election victory would be a bad idea.

But Reid disagrees. A reporter asked him, if restoring earmarks is something he could support:

"Well, of course," Reid replied. "Me? What a question to ask me. I'm one of the kings of earmarks. I think that -- I think it was a terrible disservice to America to come up with this stupid idea, stupid idea to stop congressional-directed spending.

"Of course, we should be doing it. It's the way we get things done around here. It's the way it was done for centuries. And all of a sudden, somebody comes up with the bright idea that all the government agencies and the White House can do it better than we can. They can't.

"We have a constitutional obligation to do congressionally directed spending. I've never apologized to anybody. I go home and I boast about earmarks. And that's what everyone should do."

Senate Democrats on Wednesday elected Chuck Schumer of N.Y. to replace Reid as their new leader.