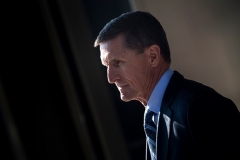 (CNSNews.com) - "This was a deliberate, malevolent, concerted effort to destroy an honest man and thereby get to the president of the United States to destroy him," Sidney Powell, Gen. Michael Flynn's attorney, told Fox News's Sean Hannity Thursday night.

"There's no doubt about it whatsoever," Powell said, just hours after the U.S. Justice Department filed a motion to dismiss the case against Flynn, who pleaded guilty to lying to the FBI.

Following Powell on Hannity's show, Sen. Lindsey Graham called this "a good day for America" because "it shows that the (justice) system "eventually does work."

The government motion to dismiss the case against Flynn says the FBI's January 24, 2017 interview with Flynn -- conducted four days after Donald Trump's inauguration -- had no "legitimate investigative basis," and therefore, Flynn's statements to the two agents were immaterial, "even if untrue."

Powell and other Flynn defenders say the FBI "entrapped" Flynn. Powell encouraged Americans to read the actual documents: "It's important for people to see it for themselves, the actual evidence in the government's own handwriting and documents."

Powell also noted that the FBI opened its counterintelligence case against Flynn on August 16, 2016, one day after FBI agent Peter Strzok and FBI attorney Lisa Page mentioned an "insurance policy" in one of their many text messages.

The day after that, August 17, 2016, Donald Trump, then the Republican presidential nominee, received his first "defensive" security briefing from the FBI and reportedly was warned about Russian attempts to spy on or infiltrate his campaign.

As Powell put it on Thursday, the FBI "slipped" an FBI agent into that defensive briefing "in complete breach of trust that was supposed to exist there...to spy on General Flynn because he is there with President Trump for that briefing."

As the Justice Department Inspector General noted in his Dec. 2019 report: "We also learned that, because Flynn was expected to attend the first such briefing for members of the Trump campaign on August 17, 2016, the FBI viewed that briefing as a possible opportunity to collect information potentially relevant to the Crossfire Hurricane and Flynn investigations. We found no evidence that the FBI consulted with (Justice) Department leadership or ODNI (intelligence) officials about this plan."

Graham will invite Flynn to tell of his ordeal

Sen. Lindsey Graham (R-S.C.) told Hannity on Thursday night, "My job is to try to coherently, without revenge but with accountability in mind, explain to the American people how the system failed, how and why."

I'm going to start with the General Flynn case. As soon as his case is dismissed, we will be pursuing the Flynn investigation and try to explain how it got so off the rails, starting with offering General Flynn a chance to come to the committee and tell the country what it was like to go through this.

We now know from McCabe that without the dossier, there would be no warrant against General Flynn. So one of my goals is to build on the Horowitz report.

Horowitz said that the sub-source, the Russian, disavowed the dossier, said it was all hearsay and bar talk, but he couldn't answer the question, did McCabe and Comey know that case had fallen apart?

That's my job -- I'm going to try to answer that question in front of the country.

Asked how long it will take to hold such a hearing, Graham said he's dealing with some "pretty slippery characters," so he's going to "do my homework" first.

"I'm not going to throw something against the wall. I'm interviewing the people who talked to the Russian sub-source. I want to know what they say before I talk to McCabe and Comey," Graham said.