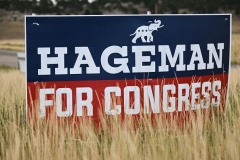 A sign of the times in Casper, Wyoming on August 14, 2022. (Photo by PATRICK T. FALLON/AFP via Getty Images)

(CNSNews.com) - Rep. Liz Cheney (R-Wyo.), resoundingly defeated in her primary election by fellow Republican Harriet Hageman, spent much of her concession speech doubling down on her vow that Donald Trump must never come near the Oval Office again.

In fact, she mentioned Trump by name at least nine times in her remarks, calling out his "election lies" and promotion of "conspiracies."

And that's what cost her the election, Hageman told Fox News's Laura Ingraham Tuesday night -- that obsession with Donald Trump:

"It doesn't surprise me that she would revert to those same old talking points, because that's really in large part what got her defeated," Hageman said:

"Wyoming is entitled to have a representative that represents our interests, that listens to us, that addresses our issues. That isn't Liz Cheney, and the fact that that's where she went back to with her speech tonight I think that demonstrates that she really isn't listening to Wyoming now, she hasn't for quite some time, and that's why we needed to replace her. We need to have a representative in Wyoming who listens to us."

Hageman said "inflation, illegal immigration, and protection of our energy jobs" are the issues that matter most to the people of Wyoming.

"And accountability. We actually expect our representatives to represent our interests. I said that a couple of times now, but that's what I've heard so much on the campaign trail."