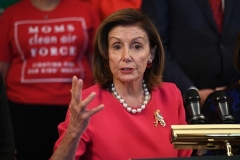 House Speaker Nancy Pelosi speaks on the Build Back Better Act on September 28, 2021. (Photo by MANDEL NGAN/AFP via Getty Images)

(CNSNews.com) - House Democrats were forced to cancel a Pelosi-promised vote on the $1.2-trillion bipartisan infrastructure bill on Thursday because they lacked the votes to pass it.

Leftist members of the Democrat caucus, led by Rep. Pramila Jayapal (D-Wash.), insist they will not allow the bipartisan bill to pass without the $3.5-trillion "Build Back Better Act alongside it," to use Jayapal's words. "We're not going to leave working people, families, and our communities behind," Jayapal tweeted late last night in support of the $3.5 trillion reconciliation bill.

The far-left extremists have completely taken over the Democrat Party, I mean completely. And if you don't capitulate to them, they will come after you, they will steamroll you, they will try and destroy you, and they are willing to do that even if you've got the word "Democrat" after your name.

What they really care about is you agreeing with them and agreeing to bow down in front of their agenda, and that's what they want right now. And of course, I'm not going to do that. I hope that Manchin and Sinema stand firm. At the end of the day, we've got to go out there and present an alternative because, as you said, what the Democrats are trying to do, what the left is trying to do, is completely remake this country.

Democrat Sens. Joe Manchin and Kyrsten Sinema object to the $3.5 trillion price tag of the reconciliation bill, which contains most of the Democrat agenda. The U.S. Chamber of Commerce has described it as 100 bills in one.

Leftist Democrats say the larger bill must pass -- or be guaranteed to pass -- before the House passes the bipartisan bill. They view the two bills as one enormous package.

"We aren’t backing down, because — even though big corporations and a few conservative Democrats are against us — 70% of people want paid leave, childcare, climate action, affordable housing, and health care. And we will deliver," Jayapal tweeted late Thursday.

In a statement released on Wednesday, Manchin -- whose vote is critical to passing the reconciliation bill -- repeated that he cannot support $3.5 trillion more in spending when Congress already has spent $5.4 trillion since last March.

“What I have made clear to the President and Democratic leaders is that spending trillions more on new and expanded government programs, when we can’t even pay for the essential social programs, like Social Security and Medicare, is the definition of fiscal insanity.”

Manchin noted that the economy is not in recession and millions of jobs remain open. “Proposing a historic expansion of social programs” while ignoring those facts “will only  feed a dysfunction that could weaken our economic recovery,” he wrote.

Manchin has indicated a preference for a $1.5 trillion reconciliation bill, the money to be spent only when the COVID relief funds are exhausted. He wants to means test any new entitlement programs to be sure only people who really need help are getting it. And he isn't inclined to raise taxes on corporations and wealthy individuals as much as other Democrats are.

Manchin (and Sinema's) opposition to the $3.5-trillion "human" infrastructure bill has infuriated leftists such as Rep. Cori Bush of Missouri, who fumed on CNN Thursday:

Because if he's not, let me introduce him to some. And as a matter of fact, he can come and speak with me. I can tell him what it's like to be a regular everyday person needing the benefits that will come with a real reconciliation package, which we made the deal was already, so the compromise was the $3.5 trillion.

We can talk about what it's like to not be able to go to college because you cannot afford it. He and I can have that conversation. Or he can come to my district and talk about it. This is -- the fact that one person who is not affected by what would come out of this build back better act, he's not affected by it personally.

But the people in our communities all across this country are. They deserve a voice. The people have to win, and it is unconscionable that he can stand puffed up and hold the line on something that hurts people now. And to say that I'll toss you some crumbs right now and then hopefully you can say you ate. It's not good enough, and I won't stand for it.

Thanks to every House Democrat, we passed and sent to the President the Continuing Resolution to keep government open to meet our responsibilities and the needs of the American people.

It has been a day of progress in fulfilling the President’s vision to Build Back Better.  Thanks to so many Members and staff, the work is being done.  Discussions continue with the House, Senate and White House to reach a bicameral framework agreement to Build Back Better through a reconciliation bill.

Many thanks to Members of our Caucus for your participation and patience over the past few days.  The Bipartisan Infrastructure bill has already had its rule passed and its debate has concluded.  All of this momentum brings us closer to shaping the reconciliation bill in a manner that will pass the House and Senate.

Thank you all for your constant, informative and occasionally humorous messages and always, for your leadership For The People.

The President is grateful to Speaker Pelosi and Leader Schumer for their extraordinary leadership, and to Members from across the Democratic Caucus who have worked so hard the past few days to try to reach an agreement on how to proceed on the Infrastructure Bill and the Build Back Better plan. A great deal of progress has been made this week, and we are closer to an agreement than ever. But we are not there yet, and so, we will need some additional time to finish the work, starting tomorrow morning first thing.

While Democrats do have some differences, we share common goals of creating good union jobs, building a clean energy future, cutting taxes for working families and small businesses, helping to give those families breathing room on basic expenses—and doing it without adding to the deficit, by making those at the top pay their fair share.>> The last we heard was from speaker Pelosi that this vote on the bipartisan infrastructure bill was still going to happen today. Is that your understanding?