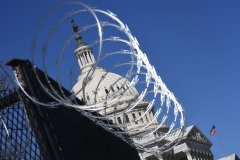 Razor wire is seen on fencing near the US Capitol Building on March 3, 2021. (Photo by ERIC BARADAT/AFP via Getty Images)

(CNSNews.com) - Frightened of "a possible plot to breach the Capitol," the U.S. House of Representatives has adjourned until Monday. The Senate, however, will remain in session.

The decision by House leaders was prompted by the following warning from the U.S. Capitol Police, issued on March 3:

The United States Capitol Police Department is aware of and prepared for any potential threats towards members of Congress or towards the Capitol complex. We have obtained intelligence that shows a possible plot to breach the Capitol by an identified militia group on Thursday, March 4. We have already made significant security upgrades to include establishing a physical structure and increasing manpower to ensure the protection of Congress, the public and our police officers.

Our Department is working with our local, state, and federal partners to stop any threats to the Capitol. We are taking the intelligence seriously. Due to the sensitive nature of this information, we cannot provide additional details at this time.

"As of late February, an unidentified group of militia violent extremists discussed plans to take control of the U.S. Capitol and remove Democratic lawmakers on or about 4 March and discussed aspirational plans to persuade thousands to travel to Washington, DC, to participate."

Television footage on Thursday showed police officers, some with dogs, stationed around the heavily fortified Capitol building as National Guard troops arrived by the busload to supplement the police presence. But the heavy security apparently isn't enough to satisfy skittish House members.

Until the ratification of the Twentieth Amendment in 1933, the official day for presidential inaugurations was March 4, the Library of Congress notes.

Painting Trump supporters as crackpot QAnons or white supremacists and keeping the Capitol heavily barricaded all feed into the Democrat narrative that Americans should be very, very afraid of Republicans in general.