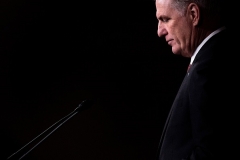 House Minority Leader Kevin McCarthy (R-Calif.) delayed a vote on Build Back Better with an 8-hour-32-minute speech on the House floor. (Photo by JIM WATSON/AFP via Getty Images)

(Update: The House erupted in cheers Friday morning when the Build Back Better Act passed on a  vote of 220-213, with all Republicans and one Democrat voting against it. The bill contains most of the Bernie Sanders/leftist agenda, and it now goes to the Senate, which is sure to make changes.)

(CNSNews.com) -  "Never in American history has so much been spent at one time," House Republican leader Kevin McCarthy said in a record-breaking, all-night speech on the House floor.

"Never in American history will so many taxes be raised and so much borrowing be needed to pay for all this reckless spending."

McCarthy's "filibuster" did not prevent a vote on the Democrats' big-government omnibus agenda bill, which happened early Friday morning. The bill now moves to the Senate, where it remains to be seen if Democrat Sens. Joe Manchin and Kyrsten Sinema will fall in line with their party's power play. Not a single Republican supports the so-called "Build Back Better Act."

House passage of the behemoth entitlement/green new deal bill was pretty much assured after the Congressional Budget Office on Thursday issued its estimate "that enacting this legislation would result in a net increase in the deficit totaling $367 billion over the 2022-2031 period, not counting any additional revenue that may be generated by additional funding for tax enforcement."

In his long speech, McCarthy said he was directing his remarks to the American people, to warn them about the bill's onerous provisions.

He mentioned the following:

-- This bill massively raises prices on all products made and manufactured in the United States;

-- This bill provides amnesty for millions of illegal immigrants and visa overstays;

-- This bill spends billions of dollars to hire 87,000 new IRS agents to spy on any American who spends as little as $28 a day;

-- This bill imposes a tax to heat your home and puts American gas prices in the hands of OPEC;

-- This bill will make the labor crisis worse by fundamentally transforming the child tax credit into welfare without any work requirement;

-- This bill abandons the Hyde Amendment;

According to a summary provided by the Congressional Research Service:

The bill provides funding for:

-- management of the National Forest System;

-- transit services and clean energy projects in low-income communities; and

-- infrastructure and administration of the Department of Veterans Affairs.

-- up to six semesters of free community college,

-- free child care for children under the age of six,

-- health benefits for eligible individuals who reside in states that have not expanded Medicaid.

The bill also includes provisions that

-- provide certain aliens with a path to permanent resident status (e.g., those who entered the United States as minors);

-- provide up to 12 weeks of paid family and medical leave;

-- restructure and increase the tax rates for certain corporations and high-income individuals (e.g., individuals with income over $400,000); and

-- require the Department of Health and Human Services to negotiate maximum prices for certain brand-name drugs under Medicare.

"Every page of all this new Washington spending will be paid for by or borrowed from you, America’s hardworking taxpayers," McCarthy said, according to excerpts of his speech posted on his website. Some of those excerpts are printed below:

"From bank surveillance to bailouts, this bill takes the problems President Biden and Democrats have already created and makes them much, much worse. It’s no secret that this bill is too extreme, too costly, and too liberal for the United States. My colleagues here in the House and in the Senate know it. And staunch liberals in the press know it."

"Despite overwhelming warnings from moderates in their party, from liberals in the press, and from the American people at the polls -- House Democrats are plugging their ears and plunging ahead without regard for the consequences. The Democrats aren’t just ignoring what’s going on. It’s worse: they aren’t even pretending to listen."