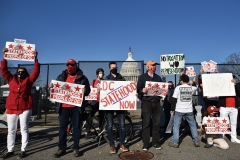 Activists rally in support of DC statehood near the US Capitol on March 22, 2021. (Photo by MANDEL NGAN/AFP via Getty Images)

(CNSNews.com) - House Democrats expect to pass a D.C. statehood bill on this Thursday, sending it to an uncertain fate in the Senate.

Two House leaders, Speaker Nancy Pelosi (D-Calif.) and Majority Leader Steny Hoyer (D-Md.) on Wednesday both said D.C. statehood is a "civil rights issue." But others, including many Republicans, see it as a naked power grab -- a means to elect two more Democrats to the U.S. Senate, since D.C. voters are overwhelmingly Democrat.

"Tomorrow, once again, we will be considering legislation to assure that the 700,000 plus people who live in the District of Columbia are, in fact, equal citizens to all their brothers and sisters throughout the United States of America," Hoyer said:

That's what this issue is about, equality of citizenship. Now, the House will put that bill on the floor tomorrow morning.

Likewise, Speaker Pelosi said the bill will "correct" an "injustice, which is also a matter of civil rights."

Our founders build our democracy on a simple promise that every American should have a voice in our government, from City Hall to the halls of Congress. Washingtonians, as the Congresswoman said, pay taxes, fight in our wars, contribute to the economic might of our country. But for centuries, they have been denied their right to representation. What does the license plate say; taxation without representation? It's one of the manifestations.

It is imperative that we correct this injustice, which is also a matter of civil rights and security. As last summer's protest in the January 6 insurrection made clear, D.C. must be empowered to protect its people. If District of Columbia were a state, the chief executive would have been able to call out the National Guard like any other head of a state in our country. Another reason for this to happen.

Pelosi said H.R. 51 (so named because D.C. would become the 51st state) will pass in the House, "and we hope that that momentum will help it pass in the Senate so that the president can sign it into law."

"Across the United States today, Americans are taking down the remnants of the Confederacy as symbols of inequality, just as the House of Representatives is rising up its nation's capital to ensure equality for all citizen, Norton said.

Not long after being elected to the House of Representatives, I got the first ever vote on D.C. statehood. Even with my party in power then, I did not succeed because there were some Democrats who opposed the bill.

My service in the Congress has been dedicated to achieving equality for the people I represent, which only statehood can provide.

Article 1, Section 8 of the Constitution establishes the seat of the federal government, separate from the states, saying Congress has the power "To exercise exclusive Legislation in all Cases whatsoever, over such District (not exceeding ten Miles square) as may...become the Seat of the Government of the United States, and to exercise like Authority over all Places purchased by the Consent of the Legislature of the State in which the Same shall be, for the Erection of Forts, Magazines, Arsenals, dock-Yards, and other needful Buildings;"

But as the Heritage Foundation has noted:

Statehood is now the clear preference of District of Columbia voting-rights advocates, but the proposal has never excited much support in Congress and would, in any case, also require a constitutional amendment since an independent territory, subject to the ultimate authority of Congress, was a critical part of the Framers' original design for an indestructible federal union of indestructible states.