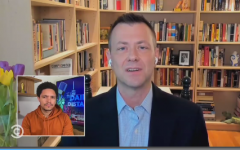 Strzok, appearing on Comedy Central's "The Daily Show" Thursday night, was asked by host Trevor Noah: "What would you change if you could go back? What are the things that you look back as an agent and say, man, that's where I didn't do the right thing or didn't do it in the right way and I should have done that differently?”

"Well, obviously, first and foremost, I wish I’d -– I never would have sent the damn text that I did. I mean, that’s -- that's the obvious, easy answer," Strzok replied, referring to the text messages he sent Lisa Page, an FBI lawyer with whom he was having an extra-marital affair.

A number of their messages disparaged Donald Trump and his supporters and expressed a preference for Hillary Clinton to win the 2016 election.

"But I think, going back, it's a great question," Strzok continued:

I wish that we would have had a better idea of what was going on with social media and the vulnerabilities that presented before we did. We saw on the terrorism side that people like Anwar al-Awlaki were using YouTube to really good effect in reaching into the homeland and radicalizing people without any sort of formal meetings.

And while we appreciated that was a tough terrorism problem, none of us -- not me or anybody else said, wow, what if the Russians started using YouTube, Twitter, Facebook to start doing the same thing, but instead of trying to recruit somebody to a terrorist organization, what if they were trying to use it to persuade people or plant disinformation?

And of course, that's exactly what they did. So I wish we would have seen that sooner. I think we're getting up to speed now, but that's the biggest thing I’d point to.

Strzok told Noah, "So the reason I wrote the book was to talk about the counterintelligence threat that Donald Trump poses to this day.

Why in the F.B.I. in 2016 we were so very concerned about his relationship with the government of Russia -- and not just his but all the people around him -- and to point out to the reader that that threat, that problem, didn't stop in 2016. Obviously, Director Mueller kept going and the problem, in fact, stays to this day. I wanted to shine a light on that.”

Strzok rejected the notion of a "deep state," although some of his critics say he exemplifies it. He noted that multiple inspector-general and congressional investigations "have found at the end of the day, that me and everybody else, that our actions were free of political bias or improper consideration and that we were doing the right thing for the right reasons.”

The investigations, of course, are not over. U.S. Attorney John Durham is still investigating the investigators -- looking into the origins and conduct of the FBI’s Trump-Russia probe.