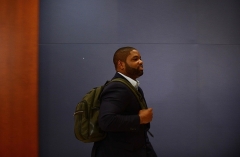 (CNSNews.com) - Rep.-elect Byron Donalds (R-Fla.) says he and like-minded conservatives are coming to Washington to oppose the "draconian socialist policies" pushed by leftist lawmakers that "are actually hurtful to the American people."

Donalds is part of a newly formed "Freedom Force" that will oppose Rep. Alexandria Ocasio-Cortez (D-N.Y.) and her so-called "squad."

We're a group of members coming into the 117th Congress who want the stand for the Constitution, stand for free markets, stand for economic freedom," Rep.-elect Donalds told Fox News on Wednesday morning:

We want Americans to literally have a nation where they are free from government control to thrive, to choose what they want to do, to live and build great families, to make our nation even greater in the years to come.

So the thing that we're going to oppose, we're never stand for, are these radical socialist policies like the Green New Deal, like Medicare for All. The things that actually take – rip, frankly, the ownership of their individual decisions from them and puts it in the hands of people here in this Capitol. People in Washington, D.C., should not be making decisions for the rest of the country.

The Freedom Force plans to push its message of "freedom and individual liberty" by making sure their views on public policy are "heard by all Americans."

Donalds used the Green New Deal as an example:

"That idea is going to cost trillions of dollars. It’s going to be the very poor people in our society, in our urban corridors who are going to pay much more in electricity prices.

"So when they try to push that idea, we're going to come up with the alternative idea, that no, we need to open the energy complex like we have over the last four years. That's some of the contrast you're going to see from the Freedom Force."

Donalds said the rich will always do well -- it's the middle-class and poor families, very small businesses, that will suffer "under the weight of government regulation and government bureaucracy."

Why does that happen? It happens because of policies like Dodd-Frank, which have frankly killed community banks in our country. So small business owners don't have those banking relationships,"  Donalds said.

"Those are the type of policies  that we need to unwind, and we need to stop the people like the squad and other people on the left from pushing those terrible policies that are actually hurtful to the American people."