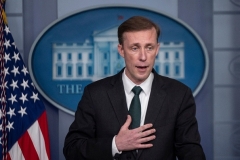 National Security Advisor Jake Sullivan speaks about the situation in Afghanistan at the White House on August 17, 2021. (Photo by ANDREW CABALLERO-REYNOLDS/AFP via Getty Images)

(CNSNews.com) - National Security Advisor Jake Sullivan said on Tuesday the Biden administration was "clear-eyed" about the possibility that the "Taliban would end up in control of Afghanistan" when Biden decided on an August 31 deadline to end the U.S. military mission there.

And Sullivan said it didn't matter if there were still U.S. troops on the ground or not: "[W]hen a civil war comes to an end with an opposing force marching on the capital, there are going to be scenes of chaos. There are going to be lots of people leaving the country. That is not something that can be fundamentally avoided."

On Wednesday, Rep. Tom Malinowski (D-N.J.) pressed for an extension of Biden's August 31st deadline, saying there's "no way" the evacuation effort will be complete by then.

Speaking at a White House press briefing, Sullivan repeated what President Biden said on Monday, that "we did not anticipate that it (the fall of Afghanistan) would happen at this speed, though we were planning for these potential contingencies."

The reason I say that at the outset, that we knew it was possible they could take over and that had to be built into our calculus in making the determination, as the president did, to draw down our forces, is because once the Taliban came into Kabul, we were going to be faced with a situation, no matter if there were still U.S. troops on the ground or no U.S. troops on the ground, of dealing with a significant number of people wanting to come to an airport to try to get evacuated.

I'll give you an example. We communicated with American citizens for weeks telling them to get out of the country. We offered financial assistance for those who wouldn't be able to afford to get on flights themselves. Many chose to stay right till the end, and that was their choice. We now are faced with the circumstance where we have to help evacuate those. That's our responsibility as the U.S. government.

But the point I'm making is that when a civil war comes to an end with an opposing force marching on the capital, there are going to be scenes of chaos. There are going to be lots of people leaving the country. That is not something that can be fundamentally avoided.

And so, while it is a--a point for reasonable debate, in my view, as to how to think about the right moment to signal the complete loss of confidence in a government or not and which is going to lead to more suffering and death or not, the fact is that we made the judgments we made based on the information we had at the time, while preparing for the alternative contingency--which was having to flow in these troops to be able to get out folks in a mass evacuation.

Sullivan, with a straight face, said the Taliban "have informed us that they are prepared to provide the safe passage of civilians to the airport, and we intend to hold them to that commitment."

As of Wednesday morning, however, live television footage showed the Taliban was blocking large numbers of desperate people, including some with green cards and visas, from entering the airport grounds. Taliban fighters were heard firing guns into the air to disperse the crowd.

"We believe that this can go till the 31st," Sullivan said. "We are talking to them about what the exact timetable is for how this will all play out. And I don't want to negotiate in public on--on working out the best modality to get the most people out in the most efficient way possible."

Sullivan refused to say if the evacuation effort will continue beyond Biden's August 31 deadline."

"If that mission is not complete by August 31st and there are Americans and Afghan allies who remain there, will U.S. troops stay until everyone is out or will they leave?" the reporter asked.

"So, I'm not going to comment on hypotheticals. What I'm going to do is stay focused on the task at hand, which is getting as many people out as rapidly as possible. And we will take that day by day."

Sullivan also was asked about the "large number of Christian missionaries and aid workers that are particularly vulnerable because they're known to be Christians. Is there any plan to get them to the airport and get them out?"

Sullivan replied, "We are working with a variety of different types of groups, journalists, aid workers, NGO workers, and so forth to help facilitate their departure from the country."

Rep. Tom Malinowski (D-N.J.) told CNN on Wednesday "there's no way humanly possible" that the evacuation effort will be complete by August 31:

"So before Kabul fell, President Biden said August 31st as the ending," Malinowski said. "And you know, the Pentagon they follow orders -- they take things literally. That is the only order they've gotten, and until that's countermanded -- until the White House says that that August 31st deadline doesn't apply to the evacuation -- then I do worry that that's the schedule that the Pentagon is operating on, and there's no way humanly possible that you can keep our promise -- the promise that the president has made -- by August 31st."

Malinowski noted that Biden has promised to "take these people out."

"And I think that is the key to being able to leave with honor, and it's key to our national interests, because we don't want to leave the message out there that we leave people behind."