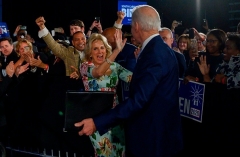 Jill Biden joins her husband for a primaray night celebration in South Carolina in February. (Photo by JIM WATSON/AFP via Getty Images)

(CNSNews.com) - Jill Biden spoke for her husband, Democrat presidential candidate Joe Biden, on Tuesday, telling Fox News's Dana Perino that her husband "will" debate President Trump three times; that her husband is a "moderate," not a leftist; and that Joe is "up to" the job of leading the country.

After listening to a video clip of Trump saying Biden isn't "competent to be president," Mrs. Biden responded:

"You know, Joe is anything but that characterization. We have been campaigning. We have been listening to the experts -- the scientists and the doctors. And they have told us, stay home and be safe.

“And I think Donald Trump is really about Joe's age, right? I think there's like two or three years difference. So, it's surprising that he would say Joe wouldn't be up to it and made those comments."

(Liberal activists in the media are now focusing in particular on Trump's mispronunciations ("Yosemite") and twisting his words ("It is what it is") to make it look like he doesn't grasp the severity of the pandemic, for example. The intent is to portray Trump as cognitively impaired.)

Responding to criticism that Joe Biden will be a "tool for the left," Mrs. Biden told Perino that "Joe is a moderate."

Perino noted that some of the policies Joe Biden backed during the primary are more progressive than those he espoused during his two terms as vice president.

"You know, I think Joe has a really strong vision of where he wants to take this country. And he has a strategy and a plan," Mrs. Biden said. "And whether it's on climate change or education or the economy, Joe knows where he's going and what he wants to do."

Mrs. Biden also answered the question of whether her husband will debate Trump, despite recent advice from former White House Press Secretary Joe Lockhart that he not do so:

Mrs. Biden also confirmed that her husband is "close" to making a "final decision" on a running mate.

And she said if her husband is elected in November, he and she "will continue to fight against cancer as we know it. And that will be one of the major initiatives that I will be involved with."

Jill Biden agreed to go on Fox News to promote her new book, "Where the Light Enters: Building a Family, Discovering Myself."