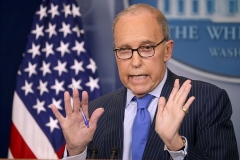 (CNSNews.com) - On various cable shows  over the weekend, White House economic adviser Larry Kudlow made the point that the terrible April unemployment situation contains a "glimmer of hope."

It’s not like all the jobs are gone, he told ABC's "This Week" with George Stephanopoulos:

Number one, as bad as those job numbers were -- and I don't want to sugarcoat it, because I think the numbers for May are going to be also very difficult numbers. It's going to take a while for the reopening to have an impact. So, there's that.

We had -- about 80 percent of it was furloughs and temporary layoffs. That, by the way, doesn't assure that you will go back to a job, but it suggests strongly that the cord between the worker and the business is still intact.

I think, hopefully, that has something to do with the $3 trillion of assistance, including the Payroll Protection Plan. All in on this, we probably, including the Federal Reserve's operations and the budget and fiscal work that President Trump has led, with the bipartisan congressional votes, we have probably had, George, $9 trillion worth of assistance going to 175 million individuals. It's a remarkable plan to attempt to stabilize a very, very, very difficult situation.

Kudlow said "safety is absolutely crucial" as the economy reopens, and he predicted that businesses will "lead the charge."

"So, my point is, why don't we rely heavily on what the businesses, the free enterprise system can produce? Companies are very innovative. They know the job that has to be done. They know, on the one hand, folks have to be safe, must be safe.

"They know, on the other hand, we have to have some reopening as much as possible to deal with the economic problem, the pandemic contraction, as I call it. So, I think, between public and private health systems, we can do this.

"I guess about half the states are off to a phased-in start. That's a good sign. Safety is absolutely crucial. But it's not either/or. I think it's safety and reopening for the economy. I think they go hand in hand."

During the interview, Stephanopoulos played a clip of former President Barack Obama calling the Trump administration's response to the pandemic "an absolute disaster," stemming from a "mind-set" of "what's in it for me and the heck with everybody else."

I mean, with all the assistance we have done, with all the infrastructure that we, the Trump administration, working with governors and mayors and with Congress. With respect to testing, with respect to all manner of, you know, PPE, medical equipment, with respect to ventilators, you know, this President Trump, one thing shouldn't be lost here, he has -- and it's unusual in these emergency situations -- he's made great use of the private sector, talking about that earlier in terms of reopening in a safe manner.

You know, we have relied very heavily on the smartest people in this country who run retail operations, pharmaceutical companies, biotech companies. You got automobile companies producing ventilators at a rapid rate. We've ramped up the testing. We have the world's largest testing percentages so far.

So, I just -- I don't understand what President Obama is saying. It just sounds so darn political to me.

I just want to say this -- look, you know, these things happen once every 100 years. But the overall pictures, we've created a massive health and safety infrastructure to deal with the pandemic here in the United States.

And judging from the results, where there has been a flattening in the rate of growth in infection rates and mortality rates, it's working, so we're preparing to reopen the economy. And when we do, I think, according to Congressional Budget Office and a bunch of private surveys, we're going to see a very strong second half of the year, probably 20 percent economic growth.

Policies that were in place on lower taxes and lower regulations are still in place. We may expand on those policies with the Congress. Next year, 2021 could be a tremendous snapback in the U.S. economy. So I'm going to leave President Obama alone.