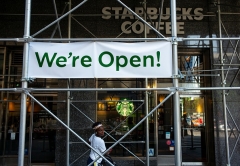 (CNSNews.com) - "Yes, we have new (COVID) cases," Labor Secretary Eugene Scalia told "Fox News Sunday." "We have to keep an eye on that."

But, he continued, "I believe that we can continue to reopen our workplaces safely. Our workplaces can be very safe places today, but there are precautions that the president, vice president have underscored, and those do remain important. We've gotten a reminder of that over the last couple of weeks."

Scalia said he anticipates a V-shaped recovery, a quick rebound, going into the fall.

Those are the indications that we see. We again have just been doing so much better over the last two months now than was being projected. And -- and again, when you look at some of the more micro data, very strong indications there as well, but that said, it is going to be important, as you're noting, that people take social distancing seriously, wear masks in circumstances often where they're not able to social distance and the like.

We can reopen safely, we can reopen while the virus is still there, but it will get more challenging if people don't take that seriously.

Host Mike Emanuel noted the record number of diagnosed cases on Friday -- 57,497, which is leading to increased hospitalizations in some places. He asked Scalia if states moved too fast to reopen:

"We knew that as people came out of their homes, emerged from their basements and the like, we knew that cases would go up," Scalia replied.

We are far, far better prepared to deal with those cases now than we were just a few months ago. We've got a much better understanding of how to treat the virus. We have the equipment, the hospital beds now to deal with the situation.

So, this is something that we can manage, but part of managing it, as I've been emphasizing, individual responsibility as well.

So we are positioned to deal with these challenges, but we again will have to take them seriously and the task force is certainly focused on delivering aid to these locations as the cases increase. The CDC, the Department of Health and Human Services are dispatching personnel, expertise and equipment where they're needed.

Scalia said one of the reasons for his optimism is the U.S.-Mexico-Canada trade agreement that took effect last week: "USMCA will be another source of stimulus, job growth to the country."

President Trump is calling for a payroll tax cut, which Democrats oppose, preferring an extension of the $600 unemployment benefit instead.

"And so, we needed that substantial unemployment benefit. But, you know, there are some states where you can get on an annual basis, $75,000 a year right now on unemployment. And I think as we reopen the economy, I don't know that we need a benefit like that," Scalia said.

“During the so-called Great Recession 10, 12 years ago when we had a downturn, the added federal unemployment benefit was $25 a week. And what we did in the CARES Act was $600 a week.

“So, I think this is something we'll get a look at, but I don't think we need that $600 benefit going forward.”