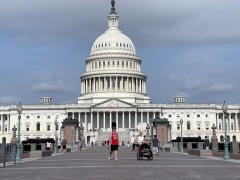 (CNSNews.com) - Marc Short, the former chief of staff to Vice President Mike Pence, is not among the Republicans celebrating the $1.2 trillion "bipartisan" infrastructure bill that includes more than half-a-trillion dollars in new spending, supposedly for physical infrastructure such as roads, bridges, and much more.

"I don't really see what Republicans get out of this," Short told "Mornings With Maria," hosted on Friday by Dagen McDowell.

The reality is that it's really -- about 10 percent of the spending is actually for roads and bridges. There's a lot for broadband and other projects, but there's also a bunch of green energy new provisions in the bill. I don't see what Republicans get.

I think that many who are voting for this are driven just by the notion that they'll get accolades back home for saying they worked in a bipartisan manner and they don't really care what's in it.

And look, bipartisanship can be good. There's no doubt we've been more partisan in the last few years. But is it really worth the cost of this bill? But I think what's a bigger cost, Dagen, that I'm most concerned about is, this is the Trojan horse that gets Sinema and Manchin on-board for trillions of dollars in massive tax increases.

And Republicans are willingly going along with this bill that gives them (Manchin and Sinema) the cover to say, look, I voted for a bipartisan bill, so now I'm going to vote for this partisan reconciliation package of trillions of dollars of new tax increases on the American people.

Sen. Kyrsten Sinema (D-Ariz.) has said she will not vote for the $3.5 trillion bill, the "human" infrastructure piece that Democrats plan to ram through without a single Republican vote. But that leaves the door open for Sinema to vote for a less expensive bill, full of new entitlements.

The enormous price tag for all kinds of new social programs, whatever the price tag turns out to be, will be paid for with tax increases.

"But as you mentioned before, you had $6 trillion in COVID relief over the last several months pumped into the system. This now, over a trillion dollars of the infrastructure bill -- and even though there's been hesitancy from Sinema and Manchin in saying they can't go to $3.5 trillion, they haven't said what price they will go to, and they have said they now will vote for the budget resolution for allows for that much spending, and especially those new taxes," Short said.

"This again, this infrastructure bill Republicans are handing to them is their excuse to vote for this massive new tax increase."

Sen. Chuck Schumer said on Friday, "The Senate remains on track to reach our goal of passing both a bipartisan infrastructure bill and a budget resolution with reconciliation instructions before the start of the August recess."

Under reconciliation, only 51 all-Democrat votes would be needed to pass the $3.5 trillion bill. Half the battle of passing that bill is voting for the budget resolution that will be the vehicle for Democrats to enact their partisan agenda.