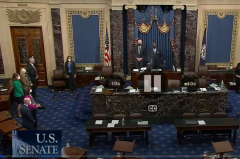 (CNSNews.com) - The "hysteria" among "professional liberals" does not spring from voting laws passed by some Republican-led states in 2021, Senate Republican Leader Mitch McConnell (R-Ky.) said in a speech on the Senate floor Wednesday.

Moreover, the Democrat hysteria, hyperbole and outright lies about voter "suppression" is not about voting "rights," McConnell said. Nor was their legislation meant to attract Republican support.

"This partisan Frankenstein bill that Democrats slapped together was intended to do one thing -- just one thing only. Give the Senate Democratic leader a pretext -- a pretext -- to break the Senate."

McConnell said Schumer, in trying to get around the 60-vote Senate filibuster rule, "will attempt a direct assault on the core identity of the Senate. Our colleague from New York will try to kill the character of the institution he is supposed to protect and serve."

Senate Democrats, led by Schumer, have found a way to launch debate about their bill to federalize elections. And when it comes time to vote on the bill, they will try -- and fail -- to force changes to the 60-vote filibuster rule that Republicans will use to stymie such a vote.

Two Senate Democrats -- Joe Manchin and Kyrsten Sinema -- have joined all 50 Republicans in opposing changes to the 60-vote threshold. Democrats are outraged.

Here is a portion of McConnell's remarks at the beginning of Wednesday's debate on the Democrats' massive "Freedom to Vote Act."

This is not about new state laws in 2021. Three years ago, in 2019, Leader Schumer was already giving interviews about supposed voter suppression. The same conspiracy theories, were being pushed back them. The same ominous buzzwords were in vogue.

And three years ago, in 2019, Democrats had already introduced their first version of the legislation they'll be pushing today.

This party-line push has never been about securing citizens' rights. It's about expanding politicians' power.

That's why their bill tries to weaken voter ID laws that are popular with Americans of all races. It's why their bill is stuffed with strange policies that have zero relationship to ballot access. New powers for bureaucrats to police citizens' speech online. New schemes where the federal government would directly fund political campaigns.

This is not some modest bill about ballot access. It's a sprawling takeover of our whole political system.

Schumer, in his floor speech, said "today's debate will help us arrive at the facts of voter suppression before we vote to take action. As we debate this issue, so critical to the wellspring of our democracy, (we) will all confront a critical question -- shall members of this chamber do what is necessary to pass these bills and move them to the president's desk?"

Schumer expressed the wish for "courage" to awaken in the hearts of his Republican colleagues before the day is out.

"But if the Senate cannot protect the right to vote -- protect the cornerstone of our democracy under the existing rules -- then the Senate rules must be reformed."