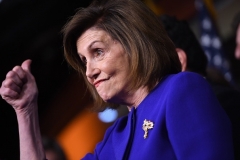 (CNSNews.com) - President Donald Trump gave House Speaker Nancy Pelosi exactly what she wanted, when he tweeted that he has "instructed my representatives to stop negotiating" another COVID relief bill -- "until after the election when, immediately after I win, we will pass a major Stimulus Bill that focuses on hardworking Americans and Small Business."

Senate Majority Leader Mitch McConnell (R-Ky.) told Fox News's Martha McCallum on Tuesday that Democrats refused to negotiate because they didn't want a deal that might work to Trump's advantage.

McConnell noted that Pelosi and various Republicans have been negotiating for two months, but "the Speaker never made a reasonable offer.

"I put on the Senate floor -- a lot of people forget it -- a proposal to deal with kids in school, small businesses and healthcare. We couldn't get a single Democrat to even take it up.

"I think it's clear, Martha, they didn't want to get a deal this soon," McConnell continued. "We will reengage after the election, as the president said. I think we do need another rescue package. But, because of the pending election, we simply weren't able to get together."

Pelosi issued a statement on Tuesday, accusing Trump of "showing his true colors -- putting himself first at the expense of the country, with the full complicity of the GOP Members of Congress."

Trump, for his part, noted that Pelosi "is asking for $2.4 Trillion Dollars to bailout poorly run, high crime, Democrat States, money that is in no way related to COVID-19. We made a very generous offer of $1.6 Trillion Dollars and, as usual, she is not negotiating in good faith. I am rejecting their request, and looking to the future of our Country. I have instructed my representatives to stop negotiating until after the election when, immediately after I win, we will pass a major Stimulus Bill that focuses on hardworking Americans and Small Business. I have asked Mitch McConnell not to delay, but to instead focus full time on approving my outstanding nominee to the United States Supreme Court, Amy Coney Barrett..."

According to Trump: "Crazy Nancy Pelosi and the Radical Left Democrats were just playing 'games' with the desperately needed Workers Stimulus Payments. They just wanted to take care of Democrat failed, high crime, Cities and States. They were never in it to help the workers, and they never will be!"

On Tuesday night, however, Trump tweeted that he would sign a stand-alone bill authorizing $1,200 stimulus checks that "will go out to our great people IMMEDIATELY. I am ready to sign right now. Are you listening Nancy?"

In a related tweet, Trump wrote: "The House & Senate should IMMEDIATELY Approve 25 Billion Dollars for Airline Payroll Support, & 135 Billion Dollars for Paycheck Protection Program for Small Business. Both of these will be fully paid for with unused funds from the Cares Act. Have this money. I will sign now!"

But that won't happen, now that Pelosi, Joe Biden and other Democrats can accuse Trump -- days before the election -- of ignoring the needs of Americans made desperate by the pandemic.

As Pelosi said in her statement:

Walking away from coronavirus talks demonstrates that President Trump is unwilling to crush the virus, as is required by the Heroes Act.  He shows his contempt for science, his disdain for our heroes -– in health care, first responders, sanitation, transportation, food workers, teachers, teachers, teachers and others -– and he refuses to put money in workers’ pockets, unless his name is printed on the check.

At the same time, the President is abandoning meeting the needs of our children as they adjust to learning in-person, virtual or hybrid.  Instead, Trump is wedded to his $150 billion tax cut for the wealthiest people in America from the CARES Act, while he refuses to give real help to poor children, the unemployed and America’s hard working families.

Clearly, the White House is in complete disarray.  Sadly, they are rejecting the urgent warnings of Fed Chairman Powell today, that ‘Too little support would lead to a weak recovery, creating unnecessary hardship for households and businesses.  Over time, household insolvencies and business bankruptcies would rise, harming the productive capacity of the economy and holding back wage growth. By contrast, the risks of overdoing it seem, for now, to be smaller.  Even if policy actions ultimately prove to be greater than needed, they will not go to waste.'"