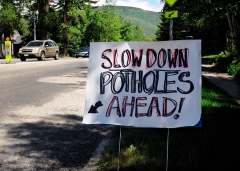 "There would be bipartisan support for a smart proposal," McConnell said in a statement:

Unfortunately, the latest liberal wish-list the White House has decided to label “infrastructure” is a major missed opportunity by this Administration.

This plan is not about rebuilding America’s backbone. Less than 6 percent of this massive proposal goes to roads and bridges. It would spend more money just on electric cars than on America’s roads, bridges, ports, airports, and waterways combined.

This proposal appears to use “infrastructure” as a Trojan horse for the largest set of tax hikes in a generation. These sweeping tax hikes would kill jobs and hold down wages at the worst possible time, as Americans try to dig out from the pandemic. But don’t worry, coastal elites — House Democrats are demanding a special SALT carve-out that would cut taxes for wealthy people in blue states.

Democrats keep trying to use important issues as smokescreens for unrelated agendas. That’s why their partisan “COVID bill” focused on non-COVID-related liberal goals like bailing out mismanaged states and breaking the link between welfare and work. That’s why their so-called “voting rights bill” tees up a one-party takeover of our democracy, with radical changes like turning the Federal Election Commission into a Democrat-run partisan body.

Transportation Secretary Pete Buttigieg told PBS on Wednesday the emphasis in Biden's plan is not on shovel-ready jobs, as it was in the Obama-Biden stimulus plan:

"This is a different focus," Buttigieg said:

That stimulus was about getting out of an economic emergency, which is also why the American Rescue Plan was so important. But the American Jobs Plan is looking to the future.

Yes, we will be supporting hundreds of billions of dollars of shovel-ready projects, but we're also interested in shovel-worthy projects, because this is a once-in-a-lifetime opportunity to shape America's infrastructure future, to make sure we're competing and winning, when other countries are doing so much more than we are.

Host Judy Woodruff noted that Republicans object not only to the cost of Biden's plan -- they also object to redefining infrastructure beyond the traditional roads, bridges, airport and other physical improvements.

For example, Biden's bill would raise wages and benefits for home care workers; expand access to long-term care under Medicaid; boost Internet service and affordability; end right-to work laws and "exclusionary" zoning laws in state and local jurisdictions; replace all lead pipes in U.S. homes and businesses; and “establish the United States as a leader in climate science, innovation, and R&D,” to name a few of the Democrat wish-list provisions.

"How do you answer that?" Woodruff asked Buttigieg:

"Well, infrastructure is being redefined whether we keep up or not, and that is not a bad thing," Buttigieg said.

Look, I'm transportation secretary, so I think a lot about things like roads and bridges that are more traditional. But, in these times, broadband is absolutely an essential part of infrastructure. Water, it might be underground, so you don't see it, but it is just as important, and often important to just the ability of communities and families to thrive at all.

This is infrastructure too. The grid, after what we just saw in Texas, Americans citizens melting snowballs in their bathtubs to be able to flush their toilets, that should never happen again. And I absolutely consider that part of an infrastructure package, even if it is not part of the transportation piece that I work on every day.

"You know, right now, I think a lot of people on both sides of the aisle are digesting the plan," Buttigieg said:

"And let me say, the president has put out a strong vision, but this is a great time to hear those critiques, hear those ideas, hear those refinements. And if people have a different or better idea on any piece of this, including how to pay for it, let's hear it."