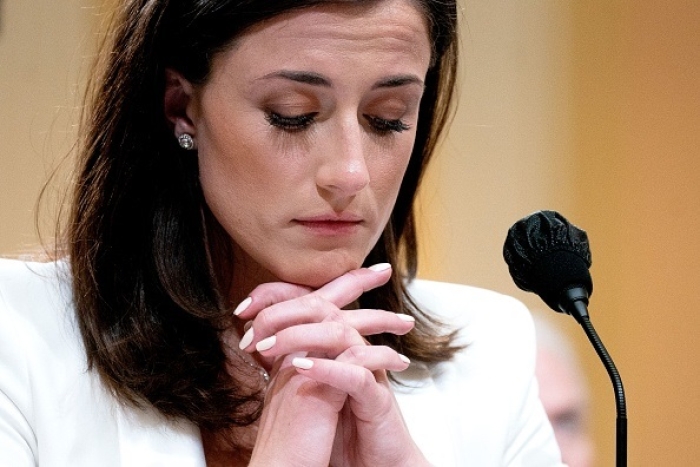 Cassidy Hutchinson, a former top aide to former White House Chief of Staff Mark Meadows, testifies before the House Select Committee to Investigate the January 6th Attack on the US Capitol on June 28, 2022. (Photo by STEFANI REYNOLDS/AFP via Getty Images)

And former Florida Attorney General Pam Bondi, a Trump supporter, backed up Trump's statement in an interview with Fox News on Wednesday night.

Bondi said she had two conversations with Hutchinson, who "loved President Trump" and was "very upset" she was turned down for a job in Florida.

"She reached out to me because she was very excited she was moving to palm beach to work for the president. She loved president trump well after the election. She loved him," Bondi said.

"She reached out to me, Sean, because she was looking for a place to live in Florida. She was very excited. This is a young 20-something-year-old. Did not have financial resources. Had not been employed. And was excited about moving to Palm Beach.

"Then her contemporaries told the president that she could not be trusted. She was a leaker when she was in the White House. And She didn't get to go to palm beach.

"She reached out to me again and she was very upset. I didn't understand why people would say that about her.

"The woman I saw yesterday on the stand was not the same woman. Now I understand. She was well-rehearsed. And in a court of law she would been cross-examined -- were you promised something for your testimony? A job? Money? Did you receive immunity for getting on the witness stand?"

"So much more -- how do you recall every detail, every detail of this testimony over a year later?"

"I hardly know who this person, Cassidy Hutchinson, is, other than I heard very negative things about her (a total phony and 'leaker'), and when she requested to go with certain others of the team to Florida after my having served a full term in office, I personally turned her request down. Why did she want to go with us if she felt we were so terrible? I understand that she was very upset and angry that I didn't want her to go, or be a member of the team. She is bad news."

At Tuesday's "surprise" hearing of the January 6 committee, Hutchinson, the star witness who formerly worked for White House Chief of Staff Mark Meadows, made the following allegations:

-- People in the pro-Trump crowd on the Ellipse on January 6 had weapons, Secret Service agent Tony Ornato told Hutchinson. She says Ornato also informed Mark Meadows and President Trump about the weapons.

-- President Trump wanted the Secret Service to get rid of the magnetometers that screen for weapons, because he felt the crowd on the Ellipse wasn't large enough and people with weapons weren't being allowed in. "I overheard the President say something to the effect of, you know, I -- I don't effing care that they have weapons. They're not here to hurt me. Take that effing mags away. Let my people in. They can march to the Capitol from here. Let the people in. Take the effing mags away," Hutchinson said.

-- Trump intended to travel to the Capitol on January 6th. When the Secret Service refused to drive him there, "the president had a very strong, a very angry response to that," Hutchinson said she learned secondhand from Tony Ornato:

"Tony described him as being irate. The president said something to the effect of I'm the f'ing president, take me up to the Capitol now, to which Bobby (Bobby Engel, another agent) responded, 'Sir, we have to go back to the West Wing.' The president reached up towards the front of the vehicle to grab at the steering wheel. Mr. Engel grabbed his arm, said, sir, you need to take your hand off the steering wheel. We're going back to the West Wing. We're not going to the Capitol.

“Mr. Trump then used his free hand to lunge towards Bobby Engel. And Mr. -- when Mr. Ornato had recounted this story to me, he had motioned towards his clavicles."

Hutchinson said Engel was in the room when Ornato told her the story. But Fox News reported that "a source close to former Trump Deputy Chief of Staff for Operations Tony Ornato says he did not brief...Cassidy Hutchinson” on the story she told the committee.

-- President Trump didn't want to stop the violence going on at the Capitol and he approved of the "hang Mike Pence" chats.