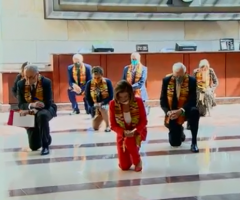 (CNSNews.com) - Showing their solidarity with Americans protesting the police killing of George Floyd and other black men, House Speaker Nancy Pelosi (D-Calif.), Senate Minority Leader Chuck Schumer (D-N.Y.), and many of their fellow Democrats knelt in silence for 8 minutes and 46 seconds at the U.S. Capitol on Monday.

That's how long a Minneapolis policeman kept his knee on George Floyd's neck, until he lost consciousness and died. The horrifying moments, as Floyd lay handcuffed on the ground, happened as three other officers stood by and did nothing and as members of the public recorded the event on cell phone cameras.

Pelosi and Schumer prefaced the event in Emancipation Hall with a few remarks:

Pelosi invoked the "tragedy" and "horror" of slaves being forcibly brought to America, "and then all of the consequences of that."

“We are here to observe that pain,” Pelosi said. “We are here to respect the actions of the American people to speak out against that, specifically manifested in police brutality. We are here to honor George Floyd.”

Pelosi read the names of Floyd and other African-Americans killed in police actions, and she invited her fellow Democrats to call out names she may have missed. (In remarks after the 8 minutes and 46 seconds of silence, she described the black men as "martyrs.")

Sen. Schumer called the event a "profound and important moment."

"Every American should try to stand in silence for 8 minutes and 46 seconds to acknowledge the pain of George Floyd, the pain of racism."

Schumer urged Americans to reflect on the phrase "justice for all" in the Pledge of Allegiance.

Democrats in both the House and Senate are about to introduce national police reform legislation called the “Justice in Policing Act.”

The goal is to boost accountability, transparency, and change the culture in the nation’s police departments.

"We cannot settle for anything less than transformative, structural change," Pelosi said. She also called for the demilitarization of police.

Schumer demanded that Senate Majority Leader Mitch McConnell (R-Ky.) bring the bill to the floor before  July. "A divided nation cannot wait for solutions," he said.