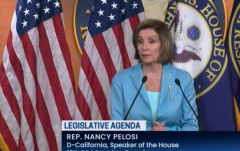 (CNSNews.com) - House Speaker Nancy Pelosi indicated on Thursday that H.R.1, the so-called "For the People" voting "rights" act, will benefit Democrats by helping to elect more of them.

The legislation would make it easier to vote in federal elections -- also easier to cheat, critics say.

"This all comes down to the gun violence issue," Pelosi said:

And as we keep saying, we are not going away until we--we pass legislation to stop gun violence.

And we will have a better chance to do that if we pass H.R. 1. Clearly the Republicans in Congress are handmaidens of the gun--gun industry. And they have prevented us from passing. And although it's bipartisan, it's not enough for us to pass it in the Senate.

So again, the “For the People Act” is really important for many reasons, including the personal safety of America's families and children.

According to a congressional summary of the bill, which has passed the House and is blocked for the moment in the closely divided Senate:

This bill addresses voter access, election integrity and security, campaign finance, and ethics for the three branches of government.

Additionally, the bill sets forth provisions related to election security, including sharing intelligence information with state election officials, supporting states in securing their election systems, developing a national strategy to protect U.S. democratic institutions, establishing in the legislative branch the National Commission to Protect United States Democratic Institutions, and other provisions to improve the cybersecurity of election systems.

The bill addresses ethics in all three branches of government, including by requiring a code of conduct for Supreme Court Justices, prohibiting Members of the House from serving on the board of a for-profit entity, and establishing additional conflict-of-interest and ethics provisions for federal employees and the White House.

The bill requires the President, the Vice President, and certain candidates for those offices to disclose 10 years of tax returns.

West Virginia Democrat Joe Manchin is under heavy pressure to support the bill, and to scrap the Senate filibuster so more of the left's agenda can pass with only 51 votes.  So far, Manchin has resisted the pressure from his party.

"It takes away almost all authority from our state governments. Republicans will oppose that bill. We don't have an alternative, because we don't think we should federalize our elections. We think our states do a pretty good job of running our election system.

"Now, I know Joe Manchin has proposed some alternatives to it, but I think the core of the bill is still extremely unpopular. You mentioned just one example, public financing for campaigns that would send hundreds of millions of your taxpayer dollars to politicians to run negative ads against their opponents. I don't think many American people are clamoring for the Democrats in Washington to pass that law."

Cotton said there is no reason for Washington to dictate voting practices to the states:

So, although I don't agree -- I don't agree with Joe Manchin on this specific bill, I am pleased that Joe has once again reiterated to his more radical colleagues that he is going to respect the rules and the customs of the Senate.

If the Democrats wanted to enact their agenda, rather than changing the Senate rules, maybe they should change their agenda and focus on bills that are a little more popular.

"Let me be clear," Sen. Joe Manchin told Fox News last November: "I will not vote to pack the courts & I will not vote to end the filibuster. The U.S. Senate is the most deliberative body in the world. It was made so that we work together in a bipartisan way. If you get rid of the filibuster, there's no reason to have a Senate."