Pelosi: Griner and Her Wife Can Celebrate the Holidays Without Worrying If Their Marriage Is Protected 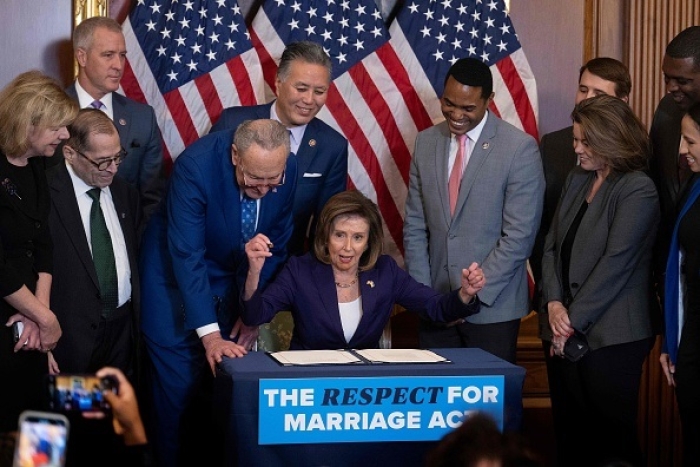 Speaker of the House Nancy Pelosi signs The Respect for Marriage Act as bipartisan Senate and House members participate in an enrollment ceremony on December 8, 2022. (Photo by JIM WATSON/AFP via Getty Images)

(CNSNews.com) - House Speaker Nancy Pelosi proclaimed Thursday to be a "glorious day here in the House."

"I mean, the joy, the pride, the euphoria that we feel today, having passed 'The Respect for Marriage Act,' a landmark decision, landmark law, changing the law for full equality," she effused. "Now the federal government will never stand in the way of anyone marrying the person you love."

Pelosi was among those noting the perfect timing of the bill's passage on Thursday -- the same day that lesbian WNBA star Brittney Griner was heading home to her wife, after President Joe Biden struck a deal to free her in exchange for a notorious arms dealer known as "the merchant of death."

"How wonderful is it that on the same day that Brittney Griner is going to be free -- thank you, President Biden. Thank you to Secretary of State and other national security people, and to my -- our colleague Greg Stanton, who represents Arizona -- Phoenix, Arizona in the Congress.

"So we are just -- her freedom is a gift to the world, to all of us. Our gift to her is this legislation that her marriage is protected wherever she may -- she may live. Her wife Cherelle and she and their family will have a holiday season without worrying about whether their marriage is protected."

Pelosi also described "a moment of personal pride," because the bill's passage brings her full circle -- codifying homosexual marriage is one of her last official duties, while promising to fight against HIV/AIDS was one of her first official promises when she came to Washington so many years ago.

The House passed The Respect for Marriage Act on a 258-169 vote, with 39 Republicans joining the Democrats voting in favor. The bill passed the Senate 61-36 last week, with the support of 12 Republicans.