Pelosi on Legalizing Marijuana: 'I'm All for It' 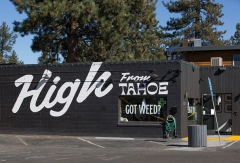 One of the marijuana dispensaries (stores) along Highway 50 as viewed on October 17, 2021, in South Lake Tahoe, California. (Photo by George Rose/Getty Images)

(CNSNews.com) - At many of her news conferences, House Speaker Nancy Pelosi (D-Calif.) talks about her concern for children -- "my reason to be here" (in the Congress), she said again on Thursday.

Also at Thursday's news conference, Pelosi expressed her support for the Marijuana Opportunity Reinvestment and Expungement (MORE) Act, which decriminalizes marijuana and eliminates criminal penalties for an individual who manufactures, distributes, or possesses marijuana. "I'm all for it," she said.

The bill also makes other changes (see below) --  including a name change -- "cannabis" instead of "marijuana" in federal legislation:

"The MORE Act that is on the floor today," Pelosi said in her opening remarks. "It's a major criminal reform bill that helps end the racial and economic injustice of marijuana decriminalization. It, ah, it's -- we're very proud of the work that has gone into it, and we would hope that it has support in the Senate."

Pelosi said the bill "is about justice."

Later, a reporter asked Pelosi what concerns Americans may have about the bill.

She noted that many states already have decriminalized marijuana, "and so this is consistent with what is happening in many states across the country. And it also addresses the injustices of it, because of what penalties had been (imposed) before the decriminalization took place. So I'm all for it," she said.

Pelosi then mentioned the "fact" that marijuana exists, is being used, and "we've got to address how it is treated legally and not in a way that mistreats people on the lower income scale -- not says, if you're wealthy, you can be engaged in all of this, but if you’re not, there are barriers to your even getting banking services in order to do it. So it's a fact of life that needed appropriate public policy to address it."

--replaces statutory references to marijuana and marihuana with cannabis,

--establishes a trust fund to support various programs and services for individuals and businesses in communities impacted by the war on drugs,

--prohibits the denial of federal public benefits to a person on the basis of certain cannabis-related conduct or convictions,

--prohibits the denial of benefits and protections under immigration laws on the basis of a cannabis-related event (e.g., conduct or a conviction),

--directs the Government Accountability Office to study the societal impact of cannabis legalization.