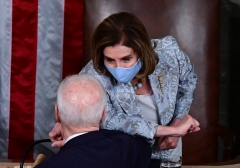 Speaker of the House Nancy Pelosi and President Joe Biden bump elbows after he addressed a joint session of Congress on April 28, 2021. (Photo by JIM WATSON/POOL/AFP via Getty Images)

(CNSNews.com) - His poll numbers may be sinking among ordinary Americans, but President Joe Biden has a loyal booster in House Speaker Nancy Pelosi, who dubbed him a "great president" on Sunday.

The California Democrat told ABC's "This Week" she has her eye on the 2022 midterm election, which Democrats "have decided to win, and that's what we will do," she said:

But, very important in all that is what it means personally to the American people, to their kitchen table issues. Whether it's whether they're going to be able to pay for food, for medicine, for rent, children's education, and the rest.

So, our focus that unifies our Democrats -- you talked about what may have divided a few of them. What unifies us is the -- is the empathy that we have for America's working families and the priority of meeting their needs. Lower cost, bigger paychecks, lower taxes, all paid for by making everyone pay their fair share, with a great president.

I think his message -- see, when we won in '06 and '08, we were left to our own devices. Just us kids. We didn't have a Democrat in the White House. Now we do. So even stronger in ability to win.

And who is more empathetic than Joe Biden? Who has more -- a bigger vision, more knowledge, more strategic thinking about all this, more authenticity in associating with America's working families?

Earlier in the interview, Stephanopoulos asked Pelosi, "Are you convinced that President Biden is doing everything he can to prevent an invasion (of Ukraine)?

"Well, look, I'm very proud of the work that the president has done," Pelosi said. "The unity of our allies and NATO to come to an agreement as to the severity of the sanctions is very, very important. And that is -- that is something that Putin should pay very close attention to."

On Saturday, the White House released the following readout of President Biden's phone call with Russian President Vladimir Putin "about Russia’s escalating military buildup on the borders of Ukraine."

President Biden was clear that, if Russia undertakes a further invasion of Ukraine, the United States together with our Allies and partners will respond decisively and impose swift and severe costs on Russia. President Biden reiterated that a further Russian invasion of Ukraine would produce widespread human suffering and diminish Russia’s standing.

President Biden was clear with President Putin that while the United States remains prepared to engage in diplomacy, in full coordination with our Allies and partners, we are equally prepared for other scenarios.

"Or it is still possible, we believe, that Russia could choose the diplomatic path. But the way they have built up their forces, the way they have maneuvered things in place makes it a distinct possibility that there will be major military action very soon. And we are prepared to continue to work on diplomacy, but we are also prepared to respond in a united and decisive way with our allies and partners should Russia proceed," Sullivan said.