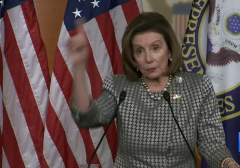 House Speaker Nancy Pelosi draws a dome with her hand as she fails to recall the phrase "Strategic Petroleum Reserve." (Photo: Screen capture)

(CNSNews.com) -  The price of gas, going higher every day, "is directly related to what is happening in Ukraine," House Speaker Nancy Pelosi (D-Calif.) told a news conference on Thursday.

"I'm not for drilling on public lands," she told the reporter who asked her: "How high do gas prices need to get before you would support something like opening up federal lands to drilling?"

Pelosi noted that some people have suggested a gas tax "holiday" as a way to lower prices at the pump.

“I bring that up, because that's what we've heard the most of. And that sounds good,” Pelosi said. “But do you know that there is no guarantee that the oil companies pass that reduction onto the consumer?

"And it's very hard to write a bill that requires them to pass it on to the consumer. You – you’d think that it's at the pump, it's the consumer paying, it comes off, but that's not the way it works.

“So I think that, if we can have a holiday that guarantees the consumer benefits rather than more profits for the oil companies, that would be a path that we can take.

Pelosi had trouble articulating at times during this news conference, at one point drawing a dome with her hand as she failed to recall the words “Strategic Petroleum Reserve.”