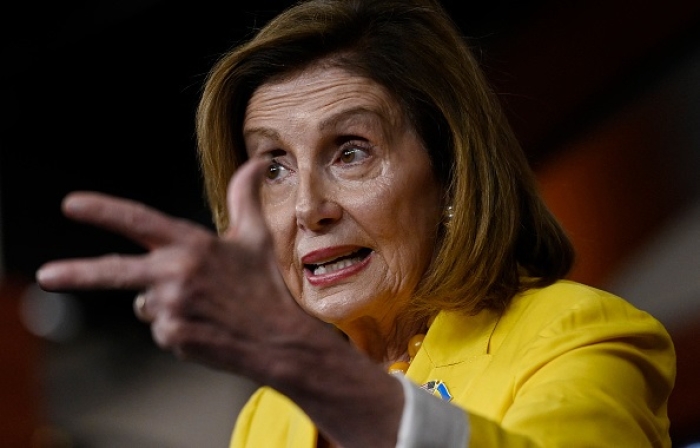 Speaker of the House Nancy Pelosi (D-Calif.) speaks at her weekly press conference on Capitol Hill on August 12, 2022. (Photo by OLIVIER DOULIERY/AFP via Getty Images)

(CNSNews.com) - At her Friday news conference, House Speaker Nancy Pelosi (D-Calif.) advanced the Democrat/media narrative that comments from former President Donald Trump and his Republican supporters following the FBI raid on Mar-a-Lago are inciting threats of violence against law enforcement.

Pelosi told reporters, "You would think there'd be an adult in the Republican room that would say, just calm down, see what the facts are and let's go from that, instead of, again, instigating assaults on law enforcement."

Here is the question and her answer -- a convoluted answer, as transcribed below:

Question: "How concerned are you about the increased level of violence against law enforcement, and are you concerned that some of the rhetoric from the former President is to blame for some of these increased threats?"

"Thank you for the question. We need more evidence than a presidential incitement of an insurrection on the Capitol, to know about causing concern about the safety of members of Congress, of our Constitution and of our law enforcement.

"We on Tuesday, we had a conference with -- a Zoom caucus with our members where we had a presentation on enhanced security for members and their staff and families. And in an unemotional, serious way, recognizing that this inflaming of situations, that have no basis in truth even, and disregard of responsibilities of law enforcement.

"So yes, but again, we have to be --there are no guarantees.

"We sign up for this, we have to do our jobs. I know very well how vicious they can be for a long time now, but certainly enhanced, if that's the word -- exacerbated by the statements of the president.

"You would think there would d be an adult in the Republican room that would say, just calm down, see what the facts are, and let's go from that, instead of, again, instigating assaults on law enforcement."