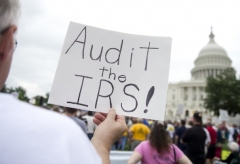 Conservatives protest the Internal Revenue Service's targeting of the Tea Party and similar groups during a rally in June 2013. (Photo by SAUL LOEB/AFP via Getty Images)

(CNSNews.com) - House Speaker Nancy Pelosi (D-Calif.) said on Tuesday she "hopes" Democrats will not be forced to drop any of the programs in their multi-trillion social policy bill.

That includes a plan to let the IRS see how much money goes into and out of your bank account every year:

A reporter told Pelosi, "Banks are starting to get calls from customers...They're concerned about this tracking of transactions that (are) greater than $600. So, Americans are starting to be worried about this." The reporter asked Pelosi if she thinks the plan, intended to catch tax cheats, is going to stay in the reconciliation bill?

"I mean, with all due respect, the plural of anecdote is not data. I've said that before here. Yes, there are concerns that some people have, but if people are breaking the law and not paying their taxes, one way to track them is through the banking measure. I think $600, that's a negotiation that will go on as to what the amount is. But, yes."

Democrats are considering a plan to vastly expand the IRS as part of their $3.5 trillion "human" infrastructure plan. As part of that plan, banks and other financial institutions would be required to tell the IRS how much money has been deposited and withdrawn every year, the same way employers must report to the IRS how much employees earn every year.

Treasury Secretary Janet Yellen said the goal is to close the "tax gap."

"There are a class of partnerships, businesses, high-income individuals who have opaque sources of income that the IRS doesn't have direct information about. That's where the tax gap is," she recently explained.

Under the plan, the Biden administration would hire tens of thousands more IRS auditors to look for tax cheats. And who would this new army of auditors go after?

Conservatives have good reason to distrust the IRS, which -- during the Obama/Biden administration -- used "heightened scrutiny and inordinate delays" in reviewing conservative groups' applications for tax-exempt status. The IRS ended up issuing a "sincere apology" for its bias against conservatives, or viewpoint discrimination.

The American Bankers Association opposes the bank reporting plan, as do many Americans with bank accounts:

"We support efforts to increase compliance so that all taxpayers meet their responsibilities, but putting financial institutions in the position of reporting more information on their account holders – especially when the benefits are far from certain – is not the answer," the ABA said.

Also See:
Biden Proposes IRS Monitor Annual Aggregate Inflows and Outflows of Bank Accounts Over $600
Sen. Barrasso: 'The Republican Party Is Not Going to Allow the IRS to Spy on Your Banking Accounts'