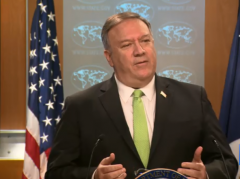 Secretary of State Mike Pompeo says he requested the firing of the State Department IG, but retaliation had nothing to do with it. (Photo: Screen capture)

(CNSNews.com) - At a news conference on Wednesday, Secretary of State Mike Pompeo refused to give specific reasons for the firing of State Department Inspector General Steve Linick. He said he "should have done it some time ago."

Pompeo said retaliation "would have been impossible," since he didn't know what Linick was investigating, if he was still investigating Pompeo.

And Pompeo slammed the office of Sen. Bob Menendez (D-N.J.) for leaking stories about Linick's firing: "I don't get my ethics guidance from a man who was criminally prosecuted," Pompeo said.

A reporter asked the Secretary of State if he plans to provide a detailed explanation of Linick's firing, along with requested documents, to Congress by Friday, as requested.

"We unalterably oppose the politically-motivated firing of inspectors general and the President’s gutting of these critical positions,” wrote Engel and Menendez.

“Reports indicate that Secretary Pompeo personally made the recommendation to fire Mr. Linick, and it is our understanding that he did so because the Inspector General had opened an investigation into wrongdoing by Secretary Pompeo himself. Such an action, transparently designed to protect Secretary Pompeo from personal accountability, would undermine the foundation of our democratic institutions and may be an illegal act of retaliation."

"First, the president has the unilateral right to choose who he wants to be his inspector general in every agency in the federal government. They're presidentially confirmed positions, and those persons, just like all of us, serve at the pleasure of the president of the United States.

"In this case, I recommended to the president that Steve Linick be terminated. Frankly, should have done it some time ago."

Reporters followed up, asking for examples of Linick's failings:

"Yeah, unlike others, I don't talk about personnel matters," Pompeo said. "I don't leak to y'all. And -- yeah, I'll just say this. I can't talk, I can't give you specificity. We'll share with the appropriate people the rationale. But there should be no mistake--" he started to say.

A reporter interrupted, asking if the reason for Linick's firing is "secret."

"Let's be clear," Pompeo said, noting that he was trying to give an answer:

I couldn't possibly have retaliated for all the things I've seen, the various stories that someone was walking my dog to sell arms to my dry cleaner. I mean, it's all just crazy. It's all crazy stuff.

So -- so I didn't have access to that information, so I couldn't possibly have retaliated. It would have been impossible.

"There's one exception," Pompeo added. He didn't give details, but he said he did answer a series of written questions (reportedly about the Saudi arms deal) from the Inspector-General's office some time earlier this year.

Again, it's not possible for there to have been retaliation.

Here's the last thing to think about as you see these stories leaked to you all, to the press. This is all coming through the office of Senator Menendez. I don't get my ethics guidance from a man who was criminally prosecuted -- case number 15-155, New Jersey Federal District Court. A man for whom his Senate colleagues, bipartisan, said basically that he was taking bribes. That's -- that's not someone who I look to for ethics guidance.

Pompeo ended the news conference there, walking out as reporters continued to shout questions.

One of the U.S. lawmakers requesting a fuller explanation of Linick's firing is Sen. Chuck Grassley (R-Iowa).

On May 16, Grassley wrote that "inspectors general are crucial in correcting government failures and promoting the accountability that the American people deserve."

Grassley noted that Linick led the State Department IG’s office after the position had been intentionally left vacant for the first four years of the Obama Administration.

"Although he failed to fully evaluate the State Department’s role in advancing the debunked Russian collusion investigation, those shortcomings do not waive the President’s responsibility to provide details to Congress when removing an IG," Grassley wrote.

"As I’ve said before, Congress requires written reasons justifying an IG’s removal. A general lack of confidence simply is not sufficient detail to satisfy Congress."