Powell: 'The U.S. Needs to Get Back on a Sustainable Fiscal Path' 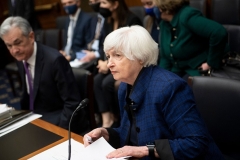 Federal Reserve Board Chairman Jerome Powell and Secretary of the Treasury Janet Yellen appear before the House Financial Services Committee on December 1, 2021. (Photo by BRENDAN SMIALOWSKI/AFP via Getty Images)

(CNSNews.com) - "We spent a lot of money in the last couple of years," Rep. Frank Lucas (R-Okla.) told a hearing of the House Financial Services Committee on Wednesday.

"Since the start of the pandemic, the United States has added more than $5 trillion to its total national debt," which now stands at about $29 trillion, Lucas noted. "The U.S. is now set to exceed the debt-to-GDP ratio not seen since the end of the Second World War."

Powell responded: "[T]he US needs to get back on a sustainable fiscal path. The right time to do that is when the economy is strong, when the taxes are rolling in, when employment is high, and the right way to do it is to have a longer-term plan to get -- really to get the economy growing faster than the debt.

"By definition, it's unsustainable to have the debt ultimately growing faster than the economy, and we have that now."

Powell described inflation as "an imbalance between supply and demand in the real economy. That's what it's about," he said. "And you know, we actually see fiscal stimulus (government spending), the stimulative aspect of fiscal policy is actually declining and will turn into a headwind next year."

"We had a very stimulative 2020, if that makes sense," Powell added.

"So, the buzz will lead to a hangover, yes?" Lucas asked:

"So, you know, what we're looking at is another strong year next year," Powell responded. "Most forecasters see strong growth, but they also see the supply chains getting untangled and they see the economy, you know, supply side rising to meet strong demand and we see inflation coming down. Again, it's not a certainty, it's a forecast."

Lucas told Powell, "But the balancing act of policymakers, as the supply increases, we still have to address the money that's available to chase those few resources, or this process won't come to an end."

Powell told the hearing that the Federal Reserve expects inflation to "move down over the second half of next year, closer to our longer-run goal of two percent." But he also said he thinks the risk of "persistent higher inflation has clearly risen, and I think that our policy has adapted to that and will continue to adapt."

Treasury Secretary Janet Yellen agreed that the $2-trillion coronavirus rescue plan Congress passed in February "was not paid for," but "[t]here was a very good reason to pass that," she said.

"We faced a major risk in terms of seeing our workforce, particularly the most vulnerable members of the American society scarred permanently, losing homes, being unable to put food on their tables, take care of their children, and being permanently financially harmed, as well as there was a shortage of demand in the economy. They could have resulted in long-lasting joblessness and high unemployment. And the plan that was enacted into law was focused on dealing with that, and it's been successful."

"It did boost demand, and that is one of several factors that were involved in inflation," Yellen said.

But Yellen repeatedly told the committee that the Democrats' $2-trillion Build Back Better Act, now awaiting Senate action, is fully paid for -- partly by hiring some 80,000 new IRS agents to audit taxpayers -- and that spending another $2 trillion ("fully paid for") will not further boost inflation.