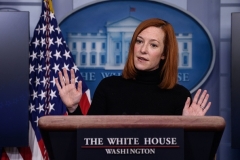 Psaki blamed it on COVID:

"Our view is that it's going to take time for workers to regain confidence in the safety of the workplace, re-establish childcare, school, and commuting arrangements, and finish getting vaccinated. And even when individuals get their first dose, we've seen a huge increase in that, as I started the briefing talking about. It's about a five to six-week cycle, so we have expected that to have an impact.

"At the same time, as we look at all of the data, we know that our economy is growing faster than any time--than any time in the last 40 years. We're creating an average of 500,000 jobs a month, up from 60,000, a month before the president took office. And we're continuing to put in place policies and measures to ensure that we're helping people make ends meet and we're helping the economy continue to grow," Psaki said.

Doocy noted that vaccines work and COVID cases are way down: "Is there any thought here that some of the worker shortage could be driven by the extra $300 in weekly unemployment benefits for September?" he asked Psaki:

"I will say, Peter, that our economists and our assessment and the assessment of many economists out there is that the impact, the largest impact are on issues related to the pandemic."

Psaki pointed to a lag in the unemployment data, telling Doocy, "we'll see" about the May jobs report, which comes out tomorrow. "People--the vaccination rates are continuing to go up, and in terms of people being fully safe, fully vaccinated, it's going to take some time. We always expected that to be a couple of months, and we expect to see continuing improvement in the numbers."

Anecdotally, a number of businesses, including hard-hit restaurants, are facing severe worker shortages that they blame on expanded unemployment benefits -- an extra $300 a week that pays people more than they would earn if they returned to their pre-COVID jobs.

Fox News's business correspondent Stuart Varney reported on Thursday that fully half of the states, all Republican-led, have now rejected the expanded unemployment benefits in an effort to get people back to work.

"Basically, Republican states have said right from the beginning, certainly months ago, go back to work. Open up the economy. Grow the economy. Democrats turned around and said no, stay safe, stay at home. We will pay to you stay home."

Well, now this political split is really obvious," Varney said, "because 25 states, half the nation's total are now rejecting these $300 a week weekly payments, emergency payments, and saying, no, we don't want them anymore. We are going to cut them off. They are not going to run through mid-September. We are ending them as of mid-June or July. That's all from Republican states.

Governor Larry Hogan is the Republican governor of Maryland. He said, look, these payments are no longer necessary. You have got 8 million jobs outstanding open and more than half the population has been vaccinated.

So you have got a clear cut, political split as to how we handle coming out of COVID. Republicans -- open up, don't take that money. Democrats, I think, trying to buy votes, saying stay at home, we'll pay you, stay safe. That's a political split for the ages.