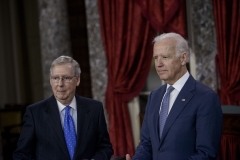 (CNSNews.com) - The White House on Wednesday brushed aside sharp criticism of President Biden’s speech on voting “rights,” in which he exaggerated the threat of “voter suppression” and “autocracy” and slammed Republicans as standing with racists and segregationists.

The normally restrained Senate Republican leader Mitch McConnell gave a sharp rebuttal, calling Biden's speech (he called it a “rant”) "incorrect, incoherent and beneath his office." (See b below)

Romney said Biden not only accused “good and principled” Republicans of having “sinister, even racist inclinations,” but Biden also said Republicans want to “turn the will of the voters into a mere suggestion, something states can respect or ignore.”

Romney, who is no fan of President Donald Trump, accused Biden of going “down the same tragic road taken by President Trump, casting doubt on the reliability of elections.”

A reporter asked Psaki about Romney’s comment about Biden casting doubt on election integrity, and Psaki was prepared for the question. She responded:

With all due respect to Senator Romney, I think anyone would note there’s a night-and-day difference between fomenting an insurrection based on lies totally debunked by 80 judges, including Trump-appointed ones, and election authorities across the country -- and making objective, true statements, which is what the President made yesterday, about the effects of a coordinated nationwide effort to undermine the constitutional right to vote.

I know there has been a lot of claim of the offensive nature of the speech yesterday — which is hilarious on many levels, given how many people sat silently over the last four years for the former president.

But I would note that, in our view and the President’s view, what is far more offensive is the effort to suppress people’s basic right to exercise who they want to support and who they want to elect.  That’s not a partisan thing. And that — that was why he gave such a strong speech yesterday.

“I have known, liked, and personally respected Joe Biden for many years. I did not recognize the man at that podium yesterday,” McConnell said.

“Well, I know the President was asked about this and said…he considers Mitch McConnell a friend.  And that is true,” Psaki replied:

That is why it is even more disappointing that someone who has supported and advocated for voting rights in the past — wrote about it in his book, has talked about it publicly — and repeatedly voted for the extension of voting rights protections is on the other side of this argument now.

You know, and I — I think it clearly struck a nerve — the President’s speech yesterday and the Vice President’s remarks.  I think there’s evidence of that.  But to us and to the President, what is more irresponsible, unbecoming, and divisive is the coordinated effort by far too many Republicans across the country to perpetuate the Big Lie and make it more difficult to vote.

And we have seen evidence of that in 19 states who passed — which passed 34 laws attacking voting rights.  That’s why he’s standing up and made the passionate case he made yesterday.

In Georgia on Tuesday, President Biden demonized Republicans who don't agree with the partisan Democrat attempt to set federal rules for state-run elections.

Biden suggested that without federal intervention in elections, the United States will slide into autocracy. And he said anyone who disagrees with the Democrat attempt to federalize voting laws stands for "voter suppression" and "subversion"; against democracy; and is on the side of racists and segregationists, whom Biden named: George Wallace, Bull Connor, and Jefferson Davis.

Twelve months ago, a newly-inaugurated President Biden stood on the West Front of the Capitol and said this: ‘My whole soul is in this: bringing America together, uniting our people, and uniting our nation.’ Yesterday, the same man delivered a deliberately divisive speech that was designed to pull our country farther apart.

Twelve months ago, this President said we should ‘see each other not as adversaries, but as neighbors.’ Yesterday, he called millions of Americans his domestic ‘enemies.’

Twelve months ago, this President called on Americans to ‘join forces, stop the shouting, and lower the temperature.’ Yesterday, he shouted that if you disagree with him, you’re George Wallace. If you don’t pass the laws he wants, you’re Bull Connor. And if you oppose giving Democrats untrammeled one-party control of the country, well, you’re Jefferson Davis.

Twelve months ago, this President said that ‘disagreement must not lead to disunion.’ But, yesterday, he invoked the bloody disunion of the Civil War to demonize Americans who disagree with him. He compared a bipartisan majority of Senators to literal traitors.

How profoundly unpresidential. I have known, liked, and personally respected Joe Biden for many years. I did not recognize the man at that podium yesterday.

McConnell noted that American voters did not give Biden a mandate.

"He got a tied Senate and negative coattails in the House. The narrowest majorities in over a century. This President did not get a mandate to transform America or reshape society. But he did arguably did get a mandate to do the one central thing he campaigned on: Bridge a divided country. Lower the temperature. Dial down the perpetual air of crisis in our politics.

“That is the one central promise that Joe Biden made. It is the one job citizens actually hired him to do," McConnell said. “But President Biden has chosen to fail his own test. The President’s rant yesterday was incorrect, incoherent, and beneath his office."

McConnell, a staunch defender of the Senate filibuster, which Democrats are trying to scrap so they can ram through their voting legislation, said, "it is the Senate’s responsibility to protect the country."

“This institution was constructed as a firewall against exactly this kind of rage and false hysteria. It falls to the Senate to put America on a better track. It falls to us."

McConnell said the Democrat hysteria and hyperbole regarding “autocracy” and voter "suppression" "are now undertaking to de-legitimize the next election in case they lose it."