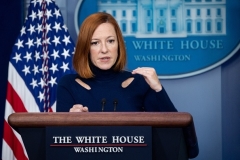 (CNSNews.com) - "You seem to be stymied on an incredible number of fronts right now," a reporter told White House Press Secretary Jen Psaki on Thursday, after a week of setbacks and negative headlines for President Joe Biden.

Psaki pushed back, looking on the bright(er) side:

"I think that having worked in a White House before, you do hard things in White Houses. You have every challenge at your -- at your feet -- laid at your feet, whether it's global or domestically. And we could certainly propose legislation to see if people support bunny rabbits and ice cream, but that wouldn't be very rewarding to the American people.

Psaki made the comment after President Biden went to Capitol Hill to discuss the way forward for federal election legislation. As it turns out, there is no path forward -- two Senate Democrats refuse to scrap the 60-vote filibuster rule to pass the Democrats' partisan bill, as Biden has pushed them to do.

Biden's Build Back Better bill likewise remains stalled in the Senate. The Supreme Court on Thursday struck down the Biden administration's vaccine mandate for large employers. Inflation is hovering at an almost 30-year high this week. And COVID is infecting more people than ever, both vaccinated and unvaccinated.

When the reporter asked Psaki about Biden being "stymied," she was ready to counter the criticism:

"Well, let me give you a little bit of a different take on this," Psaki said:

More than 200 million people are vaccinated. We've had a record job growth, record low unemployment rates historically in this country over the last year. We've rebuilt our alliances and our relationships around the world. And right now, as it relates to Russia, as you heard our National Security Adviser convey, we're working with partners around the world to convey very clearly it's up to them to make a choice about what's next.

We're not gonna make that on their behalf. It's up to them to determine if there are going to be crippling economic sanctions or not or if they decide to move forward. But we also recognize when you have a -- a small margin and threshold in the Senate it's very difficult to get things done and to get legislation passed.

And the fact that the President under his leadership got the American Rescue Plan passed, a bipartisan infrastructure bill with 19 votes in the Senate, about six votes in the House. The fact that we are still continuing to -- to work with members to determine the path forward on Build Back Better, that we have the vast majority of Democrats in the Senate supporting voting rights.

That's a path forward for us. And our effort is to do hard things, try hard things, and keep at it. So we just don't see it through the same prism.

The reporter followed up:

"So the sense is things are going well, there's no need for change right now."