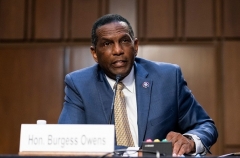 "Americans know we need to make a change," he said.

Polls indicate that a change may come in the 2022 midterm elections. And if Republicans take control of the Legislative Branch, what might that change look like?

"Getting back to basics," Owens said:

At the end of the day, what makes our country work is faith, family, the free market and education. And we're putting together a task force right now, the leadership is. So we can come out in this spring and give America exactly what we stand for.

Not just we stand against the Democrats -- that's enough -- but we are going to show exactly the policies put in place to give people the freedom to go out there and grow their dreams, build their businesses, educate our kids and get our country back on track to where we are proud of who we are and great vision of what we can accomplish.

The seven "issue-specific" task forces are "designed to identify and develop policy solutions to the issues facing the American people," McCarthy said.

The issues addressed include jobs and the economy; Big Tech censorship and data; the future of American freedoms; energy, climate, and conservation; American security; a healthy future; and China accountability.

"When Republicans retake the majority, we will come prepared to implement policies that will actually solve problems and improve people’s lives," McCarthy said at the time.

Rep. Owens was appointed to the task force on the future of American freedoms.