Rep. Chip Roy on McCarthy's Concessions: 'We Have to Work to Fix This Place' 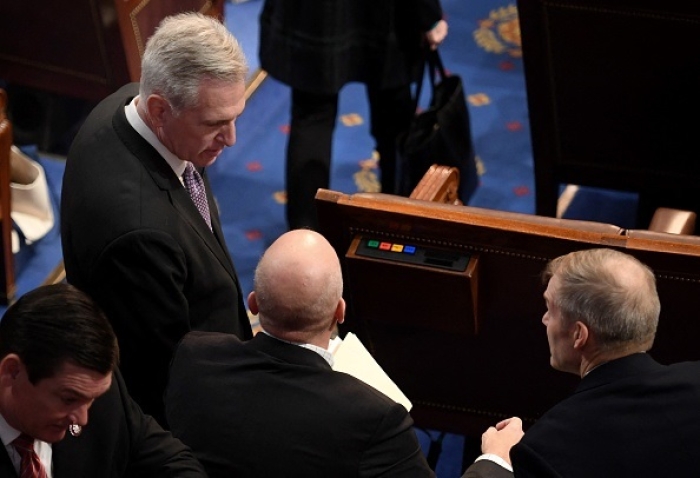 Rep. Kevin McCarthy speaks with Republican Reps. Chip Roy (bald) and Jim Jordan during the protracted battled for the House Speakership on January 4, 2023. (Photo by OLIVIER DOULIERY/AFP via Getty Images)

(CNSNews.com) - "Let's remember that a little temporary conflict is necessary in this town in order to stop this town from rolling over the American people," Rep. Chip Roy (R-Texas) told CNN's "State of the Union" on Sunday.

"I don't think anybody on either side of the aisle could say with a straight face that they think that Washington is doing good work for the American people on a regular basis and isn't broken. We have to work to fix this place."

Roy was a leading negotiator in the deal that finally allowed Rep. Kevin McCarthy to become House Speaker in a fifteenth round of voting on Friday night.

Roy said the week-long political slugfest to determine the next House speaker -- including one Republican getting in the face of another -- was worth it in the end, given the concessions Rep. Kevin McCarthy had to make to secure the gavel.

"And, look, some of the tensions you saw on display when you saw some of the interactions there between Mike Rogers and Matt Gaetz, some of that is, we need a little of that," Roy said:

"We need a little of this sort of breaking the glass in order to get us to the table, in order for us to fight for the American people, and to change the way this place is dysfunctional.

"So, this all started going back last summer. We wanted rules to open this place up. We wanted more transparency. We wanted more openness, more ability to add amendments to the floor. So, for example, you asked, what else did we get?

"...We got the ability to offer amendments on the floor of the House during appropriations that will open it up again. We haven't done that. So, since I have been in Congress, I have not been able to offer an amendment on the floor.

"There hasn't been an amendment offered in open debate since May of 2016. We changed it."

"We put more conservatives, some Freedom Caucus members -- and we're still working through who those will be -- on the Rules Committee, the powerful Rules Committee, which is the funnel by which legislation gets to the floor of the House.

"But, importantly, we were trying to stand up for rank-and-file members, because, too often -- and we saw this in December -- too often, bills are cooked up with a handful of people, they're brought through to the Rules Committee, jammed through, put on the floor, and you have to vote yes or no.

"The American people are tired of that. We need to be able to see some of the stuff we got to see this week."

Host Jake Tapper listed some of the other concessions that conservative members of the Freedom Caucus achieved, including "capping spending at 2022 levels for fiscal year 2024, a subcommittee to investigate the Justice Department, more Freedom Caucus representation on important committees like the Rules Committee, a one-member threshold for a motion to vacate [unseat the Speaker], which is what it used to be before 2019."

Tapper asked Roy whether "in the name of transparency," Republicans will put out a list of all the changes and concessions they've secured:

"And, Jake, we put out a list in, what, December 8, trying -- saying, hey, here's what we think we need to change transform this place. Here's what we need to see in any speaker.

"And so we have been out and open about that. But I want to make clear this isn't about trying to -- Chip Roy wants a spot on a committee. I haven't been promised anything. Literally, I have got nothing out of this deal for me personally.

"Does that mean I might end up on a Rules Committee? Maybe, if that's what the -- my colleagues want. We still have to go through that process. But what we have extracted are the promises from the speaker to make sure that we have ideological diversity and representation among these committees.

"Appropriations, there are two Freedom Caucus members out of 33 that are likely to be in the majority. So think about that. HFC is 20 percent of the body, yet two of 33 appropriators.

"So, let's get representation on these committees. And it's not about petty personal desires. I don't want to be on the Rules Committee."

Roy said the point is to "end the status quo."

"If Chuck Schumer doesn't want to pass those, then it's on him. Let's come back to the table and let's talk about it. But let's do our part to balance the budget, do our job and put everything on the table for everybody to sit down and do the work of the American people."