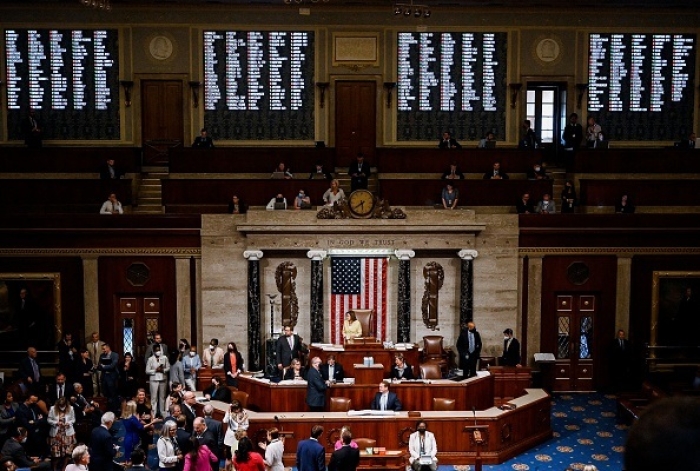 A half-empty House of Representatives is seen after voting 220-207 to pass the Inflation Reduction Act on August 12, 2022. (Photo by OLIVIER DOULIERY/AFP via Getty Images)

(CNSNews.com) - As America's children prepare to go back to school and many of their parents return to the office or place of employment, House Speaker Nancy Pelosi (D-Calif.) is allowing House members to vote by proxy until at least the end of September.

She recently extended the COVID-era practice to include last Friday’s vote on the Democrats' so-called Inflation Reduction Act.

House members don't need to return to Capitol Hill for hearings, either. They can just phone it in.

Republican Rep. Chip Roy of Texas told Fox News on Tuesday he expects Pelosi to allow proxy (absentee) voting for the foreseeable future. He said it sends a "very bad message" to the American people, and he wants to end the practice:

“"We've had members of Congress vote from boats, vote in their pajamas. They show up to committee hearings on these screens that we watch wearing pajamas.

"Last Friday I was with my family on vacation, on a rare break with my family. And I went to the airport, went to Savannah, I flew to D.C., and I got out and I did my job. Unfortunately, 158 of my colleagues did not. That is over one-third of the so-called People's House.

“And importantly, when those people go up and they vote by proxy, they're lying. They are signing a form saying they are doing it because of COVID. But you and I both know virtually all of them, if not all of them, were lying when they said it was due to COVID.

“I think that's a problem, and I think it sends a very bad message to the American people. Yes, I oppose proxy voting, I think we should end it if Republicans are in charge. I also think we should pass legislation to fire bureaucrats -- the bureaucrats who aren't doing their job. I introduced a bill to do that.

"We have an obligation to defend the Constitution. It is my perspective that it is, in fact, unconstitutional for us to engage in proxy voting. I think that the Constitution is pretty clear on it.

“I think if you read the text of the Constitution, words like 'meeting,' 'assemble,' 'attendance,' 'present,' 'absent,' 'recess,' 'sitting,' 'seat' -- it clearly requires Members of Congress to be actually present in the House or the Senate chamber. I understand technology has changed, well, then let's amend the Constitution. Let's have a debate about it."

Roy more recently introduced a bill called the "Public Service Reform Act,” which would make all federal bureaucrats at-will employees and make them more accountable to the American people they serve.

The legislation would empower federal agencies to swiftly address misconduct and remove underperforming or ill-willed employees, creating a federal workforce focused on service to the American people. The bill would provide justice to federal employees who are victims of discrimination or whistleblower retaliation.