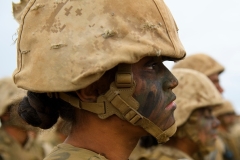 "As the House Armed Services Committee proceeds to markup the Fiscal Year (FY) 2023 National Defense Authorization Act (NDAA), I request that you oppose any effort to amend the Military Selective Service Act to require young women to register with the Selective Service," Roy wrote to the committee.

A summary of the enormous bill produced by the Senate committee says the FY 2023 NDAA "amends the Military Selective Service Act to require the registration of women for Selective Service."

"Thousands of women serve admirably in the United States Armed Forces, and I am grateful for their service and sacrifice to our country," Rep. Roy wrote.

"But, this is not a question of the dedication and willingness of American women to step up and serve their country, but whether we as a country will force the horrors of war upon our wives, our sisters, and our daughters."

"This policy is not needed and is nothing more than another symbol of 'equity,' his letter concludes. "If we are a country that actively chooses to forcibly conscript our daughters, we are past the point of salvation."

He said Democrats have "basically declared war on the American people, our way of life," and "what do Republicans do?" he asked.

"I mean, Republicans are complicit. They're saying, hey, why don't we just go along with the Democrats and let's do red flag laws and let's go forward and draft daughters. You can't even make this stuff up, and now Republicans are getting mad at me.

"Republicans are saying, well, how dare you question the genius of drafting daughters. You know, our 18-year-old women, let's send them off to war.

“You know what they say? We will never send women into combat who are drafted. But this is the same Democrats who can't even tell you the difference between a man and a woman. That's your Republican party going along with the entire equity agenda because they don't want to actually stand up and fight for the people who send them to Washington."

Carlson told Roy, "The purpose of that law is to obscure the difference between men and women and pretend there are no fundamental differences when there are."

"They care about committee chairmanships; they care about raising money. But you know what? They need to be caring about honoring their commitment to doing what they said they would do, and they are not.

"And they do things like give a $40-billion blank check to Ukraine where they're trying to say oh, we need to do that because Putin's evil. Well, I know school Putin's evil, you know Putin's evil. But why don't we go demand that we open up American oil and gas?

“Why don't we go do what we need to do to stand up for America, why don't we secure the border, why don't we stop spending money we don't have, and why don't we not draft our 18-year-old women in a fit of equity rage in order to appease leftist Democrats who want to kill us?

"I have no idea why they would do that. We need new leadership in this town."