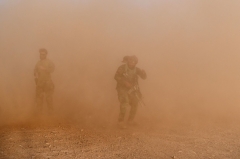 U.s. troops conduct a combat training exercise at the Shorab Military Camp in Lashkar Gah in the Afghan province of Helmand. (Photo by WAKIL KOHSAR/AFP via Getty Images)

(CNSNews.com) - Information, not verified, that Russia may have offered bounties to Taliban fighters to kill American soldiers in Afghanistan was available to leading Democrats in "much the same format" that the White House received it, but they didn't pick up on it, either, Rep. Chris Stewart (R-Utah) told CNN's "Prime Time" with Chris Cuomo Monday night.

"Nancy Pelosi had this presented to her as well in much the same format. So did Adam Schiff. All of us did. It was in the general intelligence analysis that we were seeing on a daily or weekly basis. None of them picked it out and wanted to pursue it, either," Stewart said.

President Trump said he was never told about the alleged Russian threat to U.S. troops, although it reportedly was mentioned in writing in at least one presidential daily brief.

"Everyone calls it the presidential daily brief, but it's really an executive daily brief," Stewart told Cuomo:

The other thing is, it's not just a one or two-page synopsis. The actual daily brief might be 40, 50, 60 pages. And that's on a daily basis. And from that, once or twice a week, maybe more often if necessary, but a couple of times a week they'll take out the most urgent, the most credible and they will brief the president on those things, but no president sits down and reads the entire daily brief every day. It's just too much. No president has ever claimed to do that. It's too much.

It's just, here is a list of things we're worried about. And a couple of times a week, let's talk about the most serious ones. And this one just never reached that level of credibility that they briefed to it the president.

Cuomo asked Stewart, "So you believe that the president was never told anything about this threat by anybody?"

Stewart said "absolutely," Russia might have offered bounties on Americans in Afghanistan. "Russia is not our friend. They're not an ally. They seek to harm us. They seek to diminish us and diminish our role in the world everywhere but particularly in a very vulnerable spot like the Middle East.

"So could they have done that? Absolutely. Do we know they did that? We just don't know yet. Which is why the president and other senior leadership haven't acted or done anything on this yet ,because once again, Chris, we just don't know.

House Speaker Nancy Pelosi, appearing on CNN Monday, suggested several times that the information may have been deliberately withheld from Trump:

"The question is whether the president was briefed. If he was not briefed, why would he not be briefed? Were they afraid to approach him on the subject of Russia?

"And were they concerned that, if they did tell him, that he would tell Putin? So, there's a lot that remains out there."

Host Jake Tapper told Pelosi, "It sounds like you're not sure whether or not President Trump was actually briefed, and you think that it's possible that he's lying about that."

I mean, the point is, is that, if they had this intelligence -- and, by the way, the high confidence, forget that. I mean, in other words, if you have something of that threat to our troops, you pursue it. You pursue it.

And, as an intelligence person, again, the Intelligence Committee is frequently briefed on matters that are in the works, shall we say, that we will learn more about as the -- as more intelligence is available.

So, if they had this -- if they had this intelligence, they should have briefed the president. Why didn't they? Because they know it makes him very unhappy. And all roads, for him, as you know, lead to Putin. And would he tell Putin what they knew? And now it's in the public domain, and so Putin knows anyway.

My first reaction when I heard it is, my goodness, I hope this isn't true that our troops are in further danger because of Putin. It's dangerous enough in Afghanistan, I can tell you that, without Putin injecting his bounty into it.

But, if he did, the American people should know about it. And if he did, and the Intelligence Community had an -- intelligence about it, they should have been informed the president in a way that he would understand and that he would keep highly confidential. Maybe they feared he would not. But that's why we have to see, if he were briefed, what the notes are of the briefer to the president, so they can't say, well, he told me this, and they didn't tell me that part of it.

Pelosi is demanding "the facts" and "the truth." "And let's have our suspicions, because, as I have said over and over, when it comes to President Trump, all roads lead to his friend Vladimir Putin," she added.

In general, preliminary Force Protection information is shared throughout the national security community -- and with U.S. allies -- as part of our ongoing efforts to ensure the safety of coalition forces overseas. Leaks compromise and disrupt the critical interagency work to collect, assess, and ascribe culpability.

Hostile states’ use of proxies in war zones to inflict damage on U.S. interests and troops is a constant, longstanding concern. CIA will continue to pursue every lead; analyze the information we collect with critical, objective eyes; and brief reliable intelligence to protect U.S. forces deployed around the world.

In a June 27 statement, Director of National Intelligence John Ratcliffe said, "I have confirmed that neither the President nor the Vice President were ever briefed on any intelligence alleged by the New York Times in its reporting yesterday. The White House statement addressing this issue earlier today, which denied such a briefing occurred, was accurate. The New York Times reporting, and all other subsequent news reports about such an alleged briefing are inaccurate."