Rep. Clyburn: 'We Need to Get Rid of the Filibuster for Constitutional Issues' 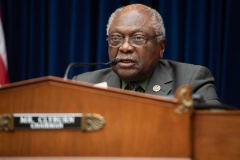 (CNSNews.com) - Under the reconciliation process, certain budgetary items can pass the Senate with a simple majority of 51 votes. But all other issues require 60 votes to cut off Senate debate.

House Majority Whip Jim Clyburn (D-S.C.) says that should change. He spoke to CNN's "State of the Union" on Sunday:

We need to get rid of the filibuster for constitutional issues, just as we have done for budget issues. If you want to argue about how high a wall ought to be, whether or not you ought to build a wall, those are issues that are political, and let's have the filibuster, if it's -- so long as there's extended debate.

That's what is wrong with this filibuster, and that's what they have done to it. So, Senator Manchin, I like him a whole lot. We have talked about this.

Sen. Joe Manchin (D-W.Va.) is under tremendous pressure in the evenly divided Senate to vote to remove or weaken the 60-vote filibuster, but he has so far refused to go along with those who see no problem in trampling on the minority party -- in this case, Republicans.

Also See:
Sen. Joe Manchin: 'I'm Not a Roadblock at All'
Failure of Democrats' H.R. 1 Spurs Louder Calls to Scrap the Filibuster
Pelosi: 'I Don't Give Up on Joe Manchin'; 'I Think He Left the Door Open'