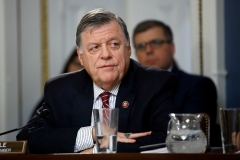 (CNSNews.com) - One day before voting to impeach President Donald Trump for the second time, members of the House Rules Committee met on Tuesday to discuss how the process will proceed.

"The gravity of this occasion should give us all pause," Rep. Tom Cole (R-Okla.), ranking member of the Rules Committee, said.

While "strongly" condemning the violence at the Capitol, Cole said the emphasis should be on healing:

After last Wednesday's traumatic and difficult events, our priority should be to find ways to come together. In a week, we will be observing and celebrating the inauguration of a new president, demonstrating that the peaceful transition of power, the tradition that's occurred at the end of every presidency since George Washington, will still proceed.

In this matter, America serves as a beacon of freedom and democracy for the entire world.

But instead of looking forward, the majority is today looking backward. I understand the anger and emotion all members feel after the events of last Wednesday. And yes, the president does bear some responsibility for what occurred. Certainly he will have to deal with the ramifications of Wednesday's events for the rest of his life.

But I differ with my colleagues in the majority, in that I do not believe their proposed course of action, impeachment, is the appropriate solution. I can think of no action the House can take that is more likely to divide the American people than by putting the country through the trauma of another impeachment.

Cole noted that instead of focusing on healing, the Democrat-led House is rushing to impeachment, foregoing an investigation, committee hearings, and testimony from fact witnesses and expert witnesses.

"They are foregoing an opportunity for members to ask questions, to review the evidence, to hear new pieces of evidence and to consult with experts on impeachment and the Constitution," Cole said.

"And they are foregoing an opportunity for the president, as accused, to be heard. Not because his reckless words are deserving of a defense, but because the presidency itself demands due process in impeachment proceedings."

"A snap impeachment without due process and without due consideration will not help bring the American people together, as our focus should be," Cole warned. "There are a variety of legislative tools that can bring us together as opposed to tear us apart."

Trump is being impeached for "incitement of insurrection" and for trying to "subvert and obstruct the certification of the results of the 2020 Presidential election."