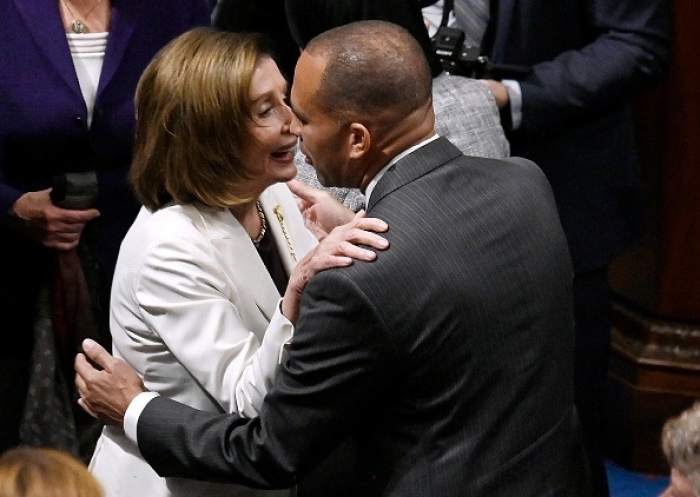 (CNSNews.com) - Rep. Hakeem Jeffries (D-N.Y.), next in line to be House Minority Leader, said on Sunday he hasn't spoken to Rep. Kevin McCarthy (R-Calif.), who is likely to be the next House Speaker.

"I haven't had a conversation with Leader McCarthy recently. I do have, I think, a much warmer relationship with Steve Scalise," Jeffries told CNN's "State of the Union" with Jake Tapper on Sunday.

"Look forward to working whenever and wherever possible, however, Jake, with the entire House Republican Conference and the leadership team to find common ground to get things done for everyday Americans to make progress," Jeffries continued.

"But, of course, we will fiercely and vigorously oppose any attempts at Republican overreach and any Republican extremism. And I'm hopeful that the Republican leadership will take lessons away from the rejection of extremism by the American people all across the land, and not double and triple down on it in the next Congress."

Tapper asked Jeffries about some of the investigations Republicans have promised to open:

"House Republicans announced this week their oversight plans, which include taking a look at the withdrawal from Afghanistan, the origins of COVID, the FBI search at Mar-a-Lago," Tapper said. "I can see that there could be, theoretically, legitimate oversight questions on each of those topics that could be asked. Will House Democrats participate in these investigations in good faith? Or do you see it as your role to defend the Biden administration?" he asked Jeffries.

"Well, we will absolutely defend the Biden administration and his track record of success if it comes under assault by people attempting to politicize our governmental responsibilities, without question," Jeffries responded:

"And I expect that we will strongly and vigorously be involved in pushing back against any effort at overreach by the extreme MAGA Republican wing of the House Republican Conference.

"At the same time, we're going to continue to try to find common ground legislatively whenever possible. I think that the time for politics ends in the immediate aftermath of a campaign, and there has to be some space to govern.

"That's what the American people, Democrats, Republicans, independents, people in the North, the South, the East, the West, the Midwest, want to see happen. Democrats are willing to lean into that regard. I'm hopeful that my Republican colleagues will join us."

"I think the American people care about whether or not their leaders are compromised, whether or not they have been involved in shady business deals that have enriched themselves and their family members," Comer told Fox News on Nov. 17, after outlining his investigation at a news conference. "So that's what our investigation is going to be about."