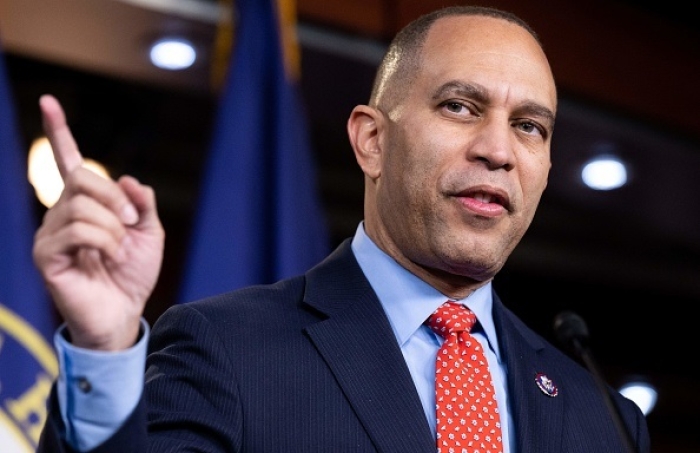 House of Representatives Minority Leader Hakeem Jeffries (D-N.Y.) at the US Capitol on January 12, 2023. (Photo by SAUL LOEB/AFP via Getty Images)

(CNSNews.com) - House Minority Leader Hakeem Jeffries (D-N.Y.) says he has "full confidence" in President Joe Biden and his administration, and he urged Republicans not to go after Biden as "part of some revenge tour."

"And so I hope that Republicans will focus on issues of consequence. Don't just embark on these investigations as it relates to the current president of the United States as part of some revenge tour," Jeffries told CNN's Wolf Blitzer on Monday evening.

"Let's figure out a way to work together, find common ground, get things done, address the kitchen table pocketbook issues of importance to the American people, which were also important to Dr. King, but of course lean into racial justice, social justice, economic justice as well."

Never mind that House Democrats have spent the past two years hammering away at Donald Trump and Republicans for what they describe as an insurrection at the poorly secured U.S. Capitol on January 6, 2021.

In fact, President Biden continues to warn about threats to democracy by people he denounces as "MAGA Republicans."

"I remain having full confidence in president Joe Biden and his administration," Jeffries said on Monday.

"On this matter [discovery of classified documents] and on all other matters, I think he has led the country forward in a significant and meaningful way through a few tumultuous years.

"Third, we know that there's a special counsel that has been appointed. It's my expectation that the special counsel is just going to simply follow the facts, apply the law, figure out what happened, present that information to the Department of Justice and to the American people, and we should take it from there."

Republicans, led by Rep. James Comer (R-Ky.), chairman of the House Oversight Committee, intend to investigate Joe Biden's alleged mishandling of classified documents found in his office at the Penn Biden Center in Washington, D.C., on November 2, a discovery not revealed to the public until last week.

A special counsel is now looking into the discovery of those documents as well as additional classified material found in the garage and library of Joe Biden's Delaware home.

Even before they learned about the classified documents, Republicans made it clear they intend to investigate "influence-peddling" by Joe Biden's son Hunter and Joe's brother James.

Comer recently told Fox New's Sean Hannity that it's a national security matter to determine if Joe Biden is "compromised" by the alleged influence-peddling involving money from China and Ukraine.

"We've produced pictures. We've produced emails, we've produced documents that show not only did Joe Biden know very well what his son and brother were doing with respect to influence peddling, but he was also part of it," Comer said last week.