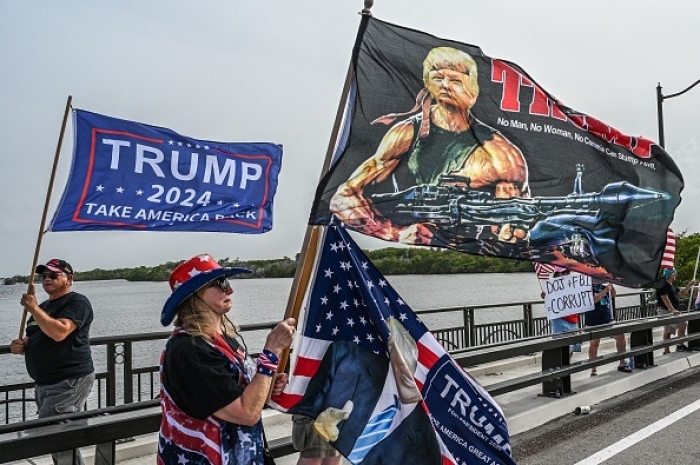 Supporters of former US President Donald Trump gather near his residence at Mar-A-Lago in Palm Beach, Florida, on August 9, 2022. (Photo by GIORGIO VIERA/AFP via Getty Images)

(CNSNews.com) - "Trump should be investigated for many things," Rep. Jamaal Bowman (D-N.Y.) told CNN's "State of the Union" on Sunday, which he joined as part of a panel discussion.

Bowman dismissed the suggestion that yet another investigation into Trump's reported possession of classified documents at his Mar-a-Lago home could work for Trump politically, by making it look like his political enemies are targeting him.

"I think the American people are tired of Trump's antics and what he represents and who he is," Bowman said:

"I think, sure, the Trumpers and the MAGA supporters are going to galvanize behind him. I mean, we already saw some armed supporters outside the FBI offices in Arizona.

"But, listen, he's dangerous, and the MAGA supporters are dangerous, and many in the Republican Party are dangerous for not condemning him. And it's important for him to be condemned and for us to move forward while holding him accountable."

After two impeachments and now the one-sided January 6 congressional "investigation," Bowman said yet another Trump probe should be launched:

"We still have the January 6 hearings taking place, the congressman said:

"Really looking forward to seeing what they continue to find in terms of his involvement with the insurrection. The fact that his home was seized, I mean, there was obviously a reason for it to be seized. He didn't comply. There was some information that he may have lied, and this is why they went in to seize the documents.

"And they found classified documents that shouldn't have been there. So Trump should be investigated from multiple angles. He's being investigated in New York as well. So, America is going through a reckoning right now. And part of that reckoning is going to be holding Trump accountable going forward."

Hilary Rosen, a CNN political contributor, took the opposite approach:

"This is unpopular for Democrats to say, but we are giving Trump way too much oxygen. And it really bothers me," she said.

"I -- it's not that I don't think he should be held accountable if he breaks the law, but, big surprise, Trump's a hypocrite, that he's saying something -- a different standard for himself than Hillary Clinton. The whole country knows he's a con man. They know he cheats on his taxes. They know that he's lied multiple times and that there was haphazard control over documents at the White House.

"And so there's -- none of this is new information."

Rosen noted that the news about Trump "totally stepped on Joe Biden's week," just as Democrats "finally got on our front feet."

"We have a lot to talk about. I just want to stop talking about Donald Trump," she said.

'Show us the goods'

Appearing earlier on "State of the Union," Rep. Mike Turner (R-Ohio), a member of the House intelligence committee, condemned violence by anyone, including Trump supporters.

He also questioned whether the FBI raid on Trump's Palm Beach home was justified:

"Well, we have a number of concerns," Turner said:

"On a bipartisan basis, Congress is saying, show us the goods. We want to know, one, what did the Department of Justice and the FBI tell the judge that they were going to find and what did they find?

There's nothing in those boxes that members of the intelligence community and the committee -- and the committee itself don't have the ability to see. If it rises to the level of an immediate national security threat, which it's what it would take to actually raid the president's home, because, as you know, they had a number of options available to them, including just going to court and asking for the courts to enforce the subpoena that they had.

"This is not unprecedented. His actions are unprecedented in history, and he has a lot of questions to answer."