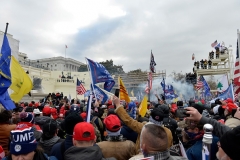 Supporters of President Donald Trump clash with police and security forces at the Capitol on January 6, 2021. (Photo by JOSEPH PREZIOSO/AFP via Getty Images)

(CNSNews.com) - Speaking outside the U.S. Capitol Tuesday morning, a group of Republicans blasted House Speaker Nancy Pelosi for excluding from her select committee two Republicans who would have asked questions she prefers to avoid.

The House Select Committee to Investigate the January 6th Attack on the U.S. Capitol was holding its first hearing on Tuesday morning with testimony from police officers as well as new video that purports to show the violence of the mob attack.

One of the Republicans Pelosi rejected, Rep. Jim Jordan (R-Ohio), asked why Democrats are avoiding the truth.

"Why don't they want to answer the fundamental question, which is, why wasn't there a better security posture on that day?" Jordan asked.

Jordan pointed to a news report from February, which he summarized this way: "Pelosi's office had previously impressed upon the Sergeant-at-Arms Paul Irving that the National Guard was to remain off Capitol grounds. Irving told House Administration the discussion centered around, quote, 'optics.'"

"Why were the Democrats so concerned about optics?" Jordan asked on Tuesday:

When you spend a year talking about defunding the police, then actually defund the police, it's kind of hard to have more police here on January 6th, like they should have done. That's the fundamental question, that's why this thing has turned into such a political charade.

The police officers who will testify today and, frankly, all Capitol Hill police officers, deserved to have more help that day, but the Democrats couldn't do it because of the political position they had taken all throughout last year. That's the fundamental question that won't be answered. That's why Republicans aren't serving on this committee.

The two Republicans appointed to the committee by Pelosi are anti-Trumpers who voted to impeach the former president.

Many Republicans, not just Jordan, say the select committee was established to further vilify Donald Trump and the entire Republican Party leading up to the midterm elections. It's a purely political charade, in other words.

As conservative columnist Patrick J. Buchanan put it on Tuesday: "Because the deck is stacked, the fix is in. Pelosi's committee has been crafted to bring in a third impeachment of Donald Trump and the GOP for posing the greatest threat to American democracy since Fort Sumter. Issues, arguments and questions Banks and Jordan would have raised would have been off-script and interrupted the agreed-upon narrative."

According to Buchanan, "Jan. 6 is the biggest and last best stick the Democrats have for retaining control of Congress in 2022. For if that election is not about the worst day for the GOP of the Trump years, it is going to be about the successes and failures of the first two Biden years."

CNN reported on Tuesday morning that the Justice Department has decided that former DOJ officials, which would include then-Acting Attorney General Jeffrey Rosen, cannot claim executive privilege to avoid testifying if the committee wants to hear from them.

Rep. Adam Schiff (D-Calif.), a member of the select committee, told CNN on Monday, “There are a number of tools that we could use” to compel the testimony of Trump and Republican Leader Kevin McCarthy.

“But we're going to do everything we can," Schiff said. "We'll use the tools that we have. Those that refuse to testify, you know, the public will likely draw an adverse inference that their testimony would be incriminating. But we hope to get as much of this evidence in the public realm as we possibly can,” Schiff said.

Republican Anti-Trumper to Her 'Bipartisan' Select Committee on Jan. 6 Attack

Buchanan: Why the Left Can't Let Go of Jan. 6

Schiff: 'There Are a Number of Tools That We Could Use' to Compel Testimony from Trump, McCarthy